InvestComics Hot Picks provides readers and speculators the low down on the new releases coming out on Wednesday each week.
Hot Picks have been weekly since 2005.
This week, new comic book release day 9/27/17.
[paypal_donation_button]

NOTE: This site is BEST VIEWED on Google Chrome.
New to InvestComics? Please read the Disclaimer here before proceeding…

Here is the bottom line. Marvel and DC make their changes because the profits are floundering. Everyone has the answers though! Everyone that isn’t a part of the board has the answers. The reasons for so many changes as in any business is to change things up and bring in new revenue. 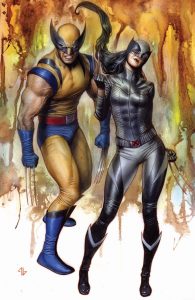 Did you know that one can tell if a late show on television is struggling just by looking at a desk placement? Moving the hosts desk is an actual sign of trying to change things up, bring a new vibe/feel to the show, get more revenue for its commercial spots. It’s absolutely true. So, is it the host fault? Maybe it’s Tom Cruise fault? A bit fell flat? Businesses try to figure out ways to spice things up, sometimes it works, sometimes it doesn’t. It’s okay. Have YOU succeeded in everything you’ve ever tried? No of course not. The Marvel diversity fell flat after a strong showing, it’s failing now and now they are adjusting. It’s okay people, it’s okay. No one died, no one got injured, your family is safe. And guess what, this is the best part, if you don’t like it, don’t read it. Now is the time to give Marvel Legacy a shot. This may work, it may not. Who knows? Either way, it’s still a product we all love, comic books. There are still plenty of stories to be told, whether you like them or not, no one is forcing you to read them. Marvel is picking up the pieces. They tried something and now it’s time to try something again. A dose of reality, Marvel and DC do not care about your opinion. They will do what THEY want to do. So, knowing this, why the uproar each and every time they want to do a makeover? Ford motors, Microsoft, Boeing, Walmart, AT&T, FedEx, etc. do not give one iota of what your opinion is when they make changes, recognize your place and act accordingly, stop embarrassing yourself and the comic community. Embrace change for what it is. Stressing over something you have no control over or does not affect the health of you or your family should never matter. It’s all entertainment, remember this.
Marvel Redux (Legacy) hits this week. Everything you knew about Marvel from yesteryear will fall back into place….mostly, with some new additions and twist. Except Peter and MJ? That’s an odd thing for Marvel to say about their total recall line, but do not fret, it will happen. A big grandiose 137 variant cover event will happen when this baby arrives, wait for it. Marvel likes money and attention, it will happen. And speaking of a lot of variant covers, Marvel Legacy #1 will have just that, lots and lots of variant covers. There are a couple of them that’ll appear in our weekly ‘Best Comic Covers’ post coming out soon. So, what to make of this Marvel Legacy? Nothing really. Nothing in the sense we go back to the drawing board once again and rid these new flagship characters as focal points. Jane is cool, as is Sam, Kamala, Miles, etc., but basics are better. Those characters do have a place in the Marvel U, just not front and center. Peter, Steve, Carol, Odinson, etc. belong front and center. Again, opinion here, save your hate mail and messages unless you can speak from an adult vantage point and not a fanboy. Definitely going to give Marvel Legacy #1 a shot here and so should you. You will, you know you will.

As Marvel Legacy debuts this Wednesday, they’ll bridge the gaps for Spidey and Cap in the same week. Generations Captain Americas #1 and Generations Miles Morales & Peter Parker Spider-Man #1.
Fan favorite character Spider-Gwen will see a transformation of some sort in Spider-Gwen #24. Be it a psychical, exterior, status quo or a mental change, not too sure. Keep an eye out on this one because any big (acceptable) change can mean a book in demand (ComicsInDemand.com). If the collector(s) give it a ‘meh’, no dice for the speculator. The reader gets rewarded either way though.
Many fans will try to make something of all the comic covers behind Deadpool on Deadpool Kills the Marvel Universe Again #5 cover. Some sites will make a whole meaningless write up about it. Although there are some key books on that wall, which is not news, the best part of this Dave Johnson cover must be Cable’s head, which is also not news, but funny. He had to do this on purpose, right? Last issue of this great mini. Cullen Bunn and Dalibor Talijic.
And speaking of covers, Rob Liefeld provides the Venomized cover for Cable #5. Looks fantastic Rob.
Ben Reilly The Scarlet Spider #8 may have an introduction.

Back in 1973, a free Marvel magazine named FOOM provided fans with all sorts of goodies in it. Puzzles, pin-ups, interviews, photos, previews, etc. Some collectors even try to pass FOOM #2 as the true first appearance of Wolverine because it predates Hulk #181. While it’s a pricey get, it never materialized as the ‘go to’ for the first appearance. However, this week Marvel brings back the free FOOM #1 magazine as it coincides with the whole Marvel Legacy deal. “Speculators” will keep an eye out on this freebie as it may contain that panel/headshot/leg shot/hand shot/shadow of a hot new character that debuts in a regular comic someplace down the line. Silly speculators and other silly speculative websites these days will jump all over this one and make sure this one counts as the Wolverine ‘first’ does not. Just to have something to write about and feel important. It will become this; first appearance ever and first appearance in a comic book. Yawn.

Wonder Woman #31 has the potential of being a hot commodity on Wednesday. This is the second appearance of Jason. Jason is Wonder Woman’s twin brother. The new WW issue begins the search for her brother Jason; “Children of the Gods” part one. He’s probably all grown up already and a total bad as*. That’s just speculation of course. He first appeared as a baby (birth) in Justice League #50 (2016).
DC claims that Detective Comics #965 will be the biggest story in the Rebirth Era. This is their semi-answer to Marvel Legacy coming this Wednesday. Part one ‘A Lonely Place Of Living’. The story will focus on Tim Drake. Buckle in!
Writer Frank Tieri continues his Metal tie-in stories this week with Batman The Murder Machine #1. Frank is really turning it up on these tie-in books. Check them out.
Okay so what is up with Nightwing on the Dan Mora Batgirl #15 cover? That left hand. Get a room guys…
DC Comics changed the Lenticular Cover for Action Comics #988. (Spoiler alert) It depicts the shadow image from the Watchmen comic as they meet their demise with the explosion. This comic also continues the big reveal from last issue. Mr. Oz is ______?! But how?!
The ‘Bloodwork’ storyline continues in The Flash #31 this week. The second appearance of Bloodwork. Joshua Williamson & Neil Googe.