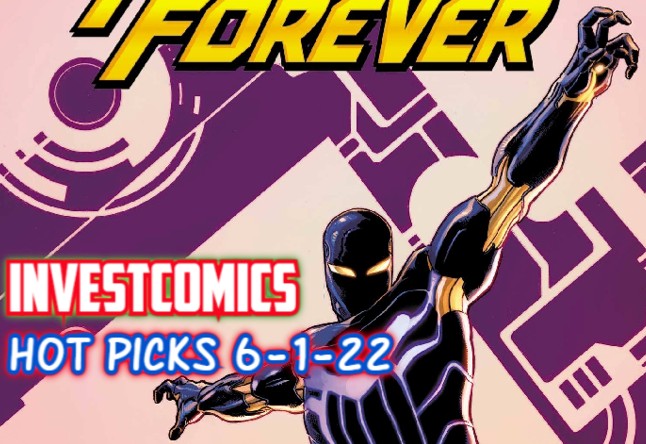 Here are this week’s top Trending/Speculative Comics out this Wednesday 6-1-22.
Please note: All new comic releases can and will change release dates from time to time. Check with your local comic shop on the guarantee of arrival time. If ordering from eBay, check with the seller or post details.
Like something we’re talking about? Like a cover? Like the debut of a new series? A first appearance?
Click on ALL Red-Highlighted LINKS/Comic Covers to BUY/BID from ALL available eBay sellers now (always buy from high-rated eBay sellers).

Miles Morales Spider-Man #38 – We were a week early and a dollar saved with this comic. Last week InvestComics gave collectors the lowdown regarding the significance of this new release. We’re going to copy and paste to refresh the short-term memory of some, but add a new element (a very obvious one at that) to what the speculator should be looking for here. The new element is noticing that there are several first appearance covers of BOTH Billie Morales and Spider-Smasher. Our two fav’s are the ones pictured in this article. Why do you ask? Glad you did. The two covers we see fit as the go to’s are solo close-up covers. You really see the characters as they display their characteristics for the first time. Yes, a couple of other covers do have a solo, but these two stand out among them. And now onto our reminder copy and paste literature from last week; Miles Morales Spider-Man #38 – Here is another sure-fire hot comic arriving this Wednesday. The comic correlates to the already pricey Miles Morales Spider-Man #13, the first appearance of “baby Billie.” Spoilers ahead, so discontinue reading if you are reading this title and live under a rock. Billie Morales is Miles Morales’ sister. Her first appearance, as a baby, was in the aforementioned comic. So, the last time we saw Billie, she was a baby. In the recent run of the Miles Morales title, he’s been battling Spider-Smasher. No, we do not make these names up. Anyway, Spider-Smasher is due to reveal themselves for the first time on new comic book day, and guess who it is? Of course, an all-grown-up Billie Morales. This will be the first “adult” appearance as Billie Morales. The cover shown here is the first appearance cover as well. That’ll be the obvious pick-up of all the covers. Do not second guess here, this will be a hot comic. Period.
Avengers Forever #6 – There isn’t an easier job in the world for a speculation outlet when a comic company announces a first appearance in their comic and has the character right on the cover with the wording; Enter Vibranium-Man. This cannot get any easier. Not too sure what this character will bring to the table, but he or she may get served papers from Peter Parker. Or better yet, Venom. We get it’s a play on Black Panther and Spidey, but man is that too close to a new Spidey costume. But didn’t we already give readers a heads up on a Black Panther/Spider-Man first appearance on a mash-up cover? Would that count as a first appearance as opposed to this? It was in InvestComics Hot Picks 4-13-22. This is why we clue you guys/gals onto these mash-ups and first appearance covers; some “expert” speculator websites or apps may have too many of these comics at their disposal, help out a store owner (or themselves) or two and pump these out as the true first appearance of Vibranium-Man and then use the markers on eBay and wherever else to collect your money. It then tanks thereafter. See, it’s all part of the system design and you learn that here. We’re designed for you to capture the swing BEFORE the others plot their markers and beef a comic for zero reasons. Making money is great, but it shouldn’t be at an InvestComics fan’s expense. Black Panther #5 was the comic we featured.
Ghost Rider #3 – And speaking of first appearance covers, here is a dope one from Francesco Mobili. Spider-Man/Ghost Rider mash-up. reminder, we’ve stood corrected by several fans on occasion regarding these first appearance covers. Sometimes a mash-up has appeared already and we’ve been incorrect in stating a first appearance cover. So, with that said, we think this is a Ghosty/Spidey mash-up first. You do your own homework, we’re quite sure we’ll hear from you if it’s not. Thanks in advance too!

Batman Annual 2022 #1 – The first appearance of Grey Wolf. And ever-so-old character (sarcasm), Clownhunter, hits an evolution cycle already.
Shadow War Omega #1 – Final Shadow War story right here. What ends is a beginning too. This issue will lead right into DC Comics’ big summer event. The Jonboy Meyers cover, even with a knife in the headless mask, Deathstroke still looks pissed. Maybe it’s not headless! NO!
The Closet #1 – This story hits on some of our childhood nightmares. Ever seen a monster in your closet? Well writer James Tynion IV shows us what is really going on behind that door. Little man Jamie is having issues seeing those monsters and daddy cannot seem to rid them even though they are relocating. And here you thought you had problems.
Carnage #3 – A possible first appearance of a new Carnage like character? Maybe new host? Something is afoot here. Yes, we said afoot.