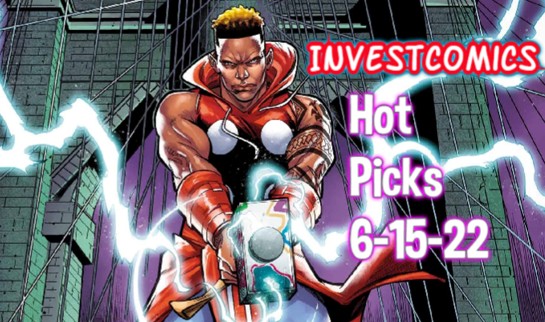 Here are this week’s top Trending/Speculative Comics out this Wednesday 6-15-22.
Please note: All new comic releases can and will change release dates from time to time. Check with your local comic shop on the guarantee of arrival time. If ordering from eBay, check with the seller or post details.
Like something we’re talking about? Like a cover? Like the debut of a new series? A first appearance?
Click on ALL Red-Highlighted LINKS/Comic Covers to BUY/BID from ALL available eBay sellers now (always buy from high-rated eBay sellers).

Marvel Tales New Fantastic Four #1 – This anthology will collect the Fantastic Four #347-#351 from the early 1990’s. At the time, the NEW Fantastic Four. The price here for the anthology will be $7.99. The ORIGINAL comics can be purchased for a tad bit more. Why not get those instead?
Spider-Gwen Gwenverse #3 – We’ve been informing readers to stay on top of each issue within this series due to the fact each issue practically introduces a new Gwen character. This issue will hit us with Gwen-Cap. She’s right there on the cover. Maybe one of these mash-ups will eventually hit in a different way and then all of a sudden the speculators decide they want to make money. The new push will happen (for zero reasons) and that’s that, a new “hot comic”. So, avoid the chase and just get the first appearances for cover price. Settle in and maybe something will happen. The Peach Momoko variant cover shows us Gwen as Iron Man. Is this a first too or did she appear on the variant jam cover? Speaking of covers, a first appearance Fortnite cover this week too; Iron Fist #4.
What If…? Miles Morales #4 – As the same text you just read regarding the Gwenverse comics, it all applies here as well. We’ve been saying this about this title. Each issue is bringing with it another first appearance. A bit different here though. These first appearances are of a Puerto Rican superhero. Last issue was the Puerto Rican Hulk’s first appearance, this issue will be the first appearance of Miles Morales as Thor. A Puerto Rican Thor. Quite awesome. Love it. We like this. Writer Yehudi Mercado and artist Luigi Zagaria.
Spider-Man 2099 Exodus #2 – The first appearance of Loki 2099. We like this one too.
Iron Man #20 – This book was hot for about a minute when Marvel released their solicits for their fans and shop owners. Now? Well, maybe not so much, but it’s still of interest to some. Tony Stark will ask Patsy Walker, a.k.a. Hellcat, to marry him. This will probably lead to nowhere, but it’s still a rarity to witness Stark fully commit to anything, let alone marriage.

Fantastic Four #44 – Marvel promises a major consequence regarding the end of the Reckoning War story here.
Seven Sons #1 – It’s been 28 years since artist Jae Lee last graced fans in a new titled comic. The new project will release from the Image Comics label. Written by Robert Windom and Kelvin Mao.
Do A Powerbomb! #1 – New limited series from Image Comics. Written and drawn by Daniel Warren Johnson.
A Calculated Man #1 – New series from Aftershock Comics. Writer Paul Tobin and artist Alberto Albuquerque.
Captain America Sentinel Of Liberty #1 – Another “ground-breaking” Captain America story. Steve Rogers is taking a “new” stand on how he approaches the 21st century. Does anyone remember when Steve was shooting guns? Yeah, that didn’t last too long. Not saying he’s shooting guns here, just stating a lot of “big” changes this character goes through either never sticks or is forgotten about altogether. Maybe writer Collin Kelly has an approach readers have not seen before. Marvel seems to think readers are in for a NEW something when it comes to this Cap.
Secret Reverse #1 – From Viz Media, a new Spider-Man/Iron Man story from the creator of Yu-Gi-Oh, Kazuki Takahashi.