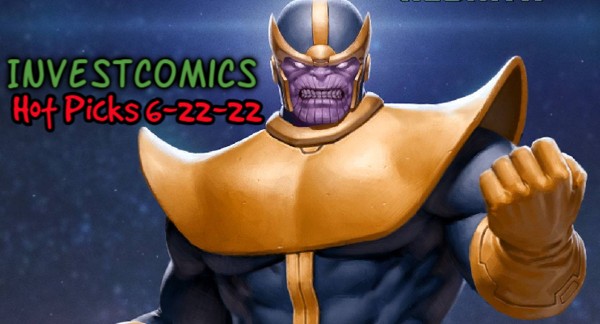 Here are this week’s top Trending/Speculative Comics out this Wednesday 6-22-22.
Please note: All new comic releases can and will change release dates from time to time. Check with your local comic shop on the guarantee of arrival time. If ordering from eBay, check with the seller or post details.
Like something we’re talking about? Like a cover? Like the debut of a new series? A first appearance?
Click on ALL Red-Highlighted LINKS/Comic Covers to BUY/BID from ALL available eBay sellers now (always buy from high-rated eBay sellers).

Something is Killing The Children #24 – This series was picked up from the get-go by InvestComics in Top 5 Trending Comics 9-4-19. If you heeded our sold-out warning, well you’ve made a ton of cash. Just a reminder, our Crypto donation box is above. So, we’ve given warnings throughout regarding this series, and here comes another one. A new character(?) within the pages of the new release this Wednesday. A possibility and you best be on top of it or you’ll miss the boat once again. Anything pertaining to this series that hints at an origin, a new character, or whatever else will be a hot comic. If and when Boom Studios and a studio, be it television or film, get their act together and deliver a live-action screen of this story (maybe even an animation), the speculative side will absolutely go bonkers.
New Fantastic Four #1 – In last week’s Hot Picks article, we didn’t even realize that the reprint New Fantastic Four book (Marvel Tales New Fantastic Four #1 ) was to get its own series a week later. Why exactly are these characters coming back together so many years later in their own series? Is this a Disney test to gauge if this group is the Fantastic Four to see on screen instead of the original Four? That’s mucho far-fetched but never say never. Once again we offer what we offered last week, although after we posted our article, a slight bump occurred. The New Fantastic Four first appearance; Fantastic Four #347-#351 back in the 1990’s. boy-o-boy, were these comics hot back then.
Miles Morales Spider-Man #39 – Sometimes a comic book cover forces your head around as you pass it because of the sheer glimpse of beauty. Sometimes it turns your head because of the wrong reasons, a side boob, or the provocative nature of it. With the new Taurin Clarke cover, we are surprised it made it through the channels considering its hardcore nature. It’s a very “Un-Disney” like cover. Let us first enlighten our thought and disclaimer before we get called out for being too “feely” about things. We are not insulted, hurt, disturbed, bothered, emotionally damaged, or any other adjective one can come up with. We’re simply making an observation and in no way are we trying to insult or begin any drama regarding the great artist of this cover. The observation is firmly planted within the speculative boundaries of collecting. With the disclaimer out of the way, this cover sure is in line for a call-back, no? America, in general, is in a sensitive area these days and this cover (in our opinion) crosses some hr line….somewhere. We could be and probably are off base here, but do not be surprised if this cover is either pulled or censored. By comparison, were some of the Frank Miller Daredevil covers back during his run pushing the envelope? Maybe, probably. Would Daredevil #160 ever exist today? How about Daredevil #183? Just two of COUNTLESS comic covers throughout history that would be borderline holy-s*it in today’s world. Back in the late 70’s and early 80’s, things were a tad different when it came to feelings and emotional damage from anything. So, getting back to this Wednesday, 2022. Will this cover cause a stir? Well, let’s put it this way, when we do our weekly planning on our social media sites, we will have to crop this cover for our LinkedIn and Instagram accounts for sure. We shouldn’t have to, but we have to because of their guidelines. Understandable too because it is a privately owned company and it can do whatever they please with its platform, and its rules and we will abide by them……but don’t be surprised if the cover gets pulled altogether for a tamer one or never to be seen again. Just be sure to tell everyone who gave you a heads up.
Black Adam #1 – The movie trailer is a hit with fans. This comic will sort of re-introduce Black Adam to the masses. With superstar creative power Rafa Sandoval (art) and writer Christopher Priest on board, this will definitely be one to check out.
Miles Morales and Moon Girl #1 – Moon Girl is back once again with a new number one issue. This time she’s teaming with Miles Morales. She’ll team with the Avengers and X-Men in upcoming issues. Writer Mohale Mashigo will deliver the goods here.

Dark Crisis Young Justice #1 – More Dark Crisis story from DC Comics.
Silver Surfer Rebirth #5 – the final issue of this popular limited series. A tremendous job from writer Ron Marz and artist Ron Lim.
Punisher War Journal – Blitz #1 – The Punisher War Journal books were always a good read. None of them ever amounted to a speculative cash-out in a big way. That won’t change here, but its still a debut Punisher book.
Duo #2 – The second appearance of Duo. This has WB television series written all over it. Or it has some television outlet written all over it. With Greg Pak writing, you know you’re getting a solid story.
Kung Fu Legume #1 – KeenSpot with another introduction debut comic. On the speculative side, Keenspot is not blowing it up on eBay, but their stories are humorous and fun. Who knows one day one of these debuts will catch on the speculative side. If one ever does, look out because these comics are printed by the droves.