Berkeley, CA – April 19, 2011 – Crazed serial killers often claim to be doing God’s work, but what if one really was? MYSTERIOUS WAYS, a six-issue miniseries from Image Comics’ Top Cow Productions proposes an answer to that disturbing question. This July, video game industry titan Jason Rubin (The Iron Saint) joins forces with artist Tyler Kirkham (Green Lantern Corps, Amazing Spider-Man) to introduce this dark and action-packed thriller that will have you questioning everything you believe.

MYSTERIOUS WAYS takes a number of archetypes from classic crime suspense stories and turns them on their head over the course of the story. Sam, the down on his luck, alcoholic ex-cop is not what he seems. Neither is the sharp-tongued, gothic bar waitress. Certainly not the by-the-book FBI agent with a perfect arrest record!

“MYSTERIOUS WAYS has been in my head for the better part of a decade, so it’s great to see it come to fruition with style,” said Rubin. “Tyler and our inker, Sal Regla, are at the top of their game, and I can’t thank Top Cow and Image enough for their commitment to bringing out books of the highest quality.”

“Jason shows how diverse a story teller he is,” added Kirkham. “MYSTERIOUS WAYS is as far from Crash Bandicoot as you could possibly go. It’s a sick thrill ride from start to finish!”

Not only will MYSTERIOUS WAYS provide a disturbing new story for horror fans, but beginning the last week of April, readers will also be asked to predict how MYSTERIOUS WAYS plays out, and most importantly how it ends, with a contest in which the reader that submits the closest description of the storyline through the Website by the day the second issue hits stores will receive every Top Cow comic released over the next 12 months, absolutely free! Participants must submit their entries through Top Cow’s new community Website, The Barn at www.topcow.com/barn. The winner will be announced after the last issue ships. 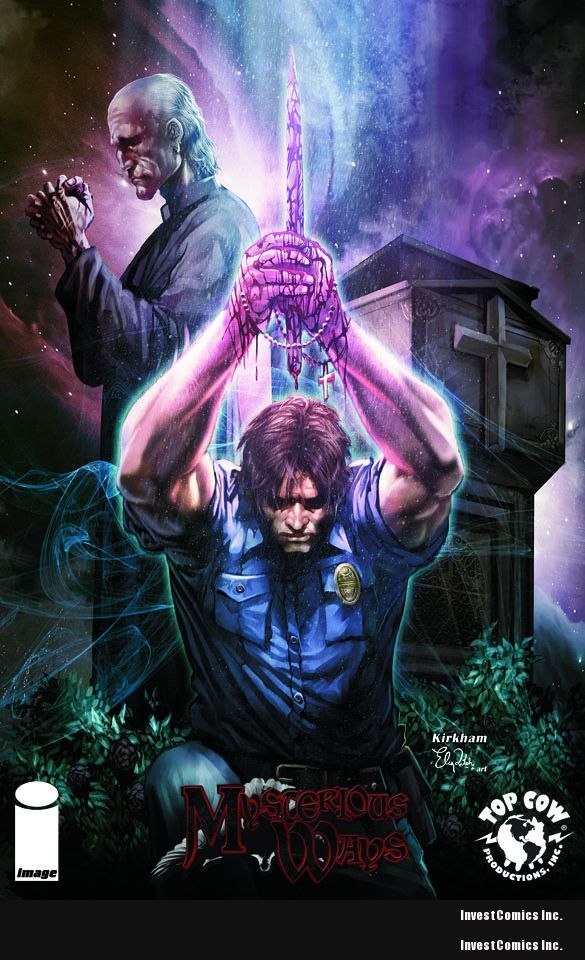 ABOUT TOP COW PRODUCTIONS INC.
Top Cow Productions, Inc. (www.topcow.com), a Los Angeles-based entertainment company, was founded in December of 1992 by artist Marc Silvestri, who also co-founded Image Comics earlier that same year. Top Cow currently publishes its line of comic books in 21 languages in over 55 different countries. The company has launched 20 franchises (18 original and two licensed) in the industry’s Top 10, seven at #1, a feat accomplished by no other publisher in the last two decades. Its flagship franchise, WITCHBLADE, was TNT’s #1 original film of 2000 and the subsequent TV series was released on DVD on July 29, 2008.  WITCHBLADE is also the first American property to be fully adapted in Japan as an original anime and manga by Studio GONZO in 2006. Top Cow’s other flagship property, THE DARKNESS, was developed into a major next-generation video game release by Starbreeze and 2K Games and achieved platinum sales status. A second game is slated for release from 2K Games in the Fall of 2011. WANTED, an Eisner-nominated miniseries published by Top Cow from 2003-2005, is now a major motion picture from Universal Pictures starring Angelina Jolie, James McAvoy and Morgan Freeman. Virtually all of Top Cow’s other properties are in development as feature films, live-action television, animation or video games. Top Cow has also successfully licensed and merchandised its franchises into toys, statues, clothing, lithographs, puppets, posters, magnets, shot glasses, lighters, lunch pails, wall scrolls, mouse pads, die-cast cars, calendars, Christmas ornaments, Halloween masks, trading cards, standees, video games and roleplaying games.