Jonathan Hickman will be at Collector’s Paradise in Conoga Park, California for a signing experience.

Where will you be?

"Coming down to Southern California for a signing has been a long time coming," Hickman said. "There’s an amazing amount of great stores in Southern California and I’m very excited about my first signing. Edward and the crew at Collector’s Paradise have already gone a long way to make me feel welcome."

Collector’s Paradise owner Ed Greenberg added, "We’ve been home to a great roster of signings over the years, especially in recent months, but Jonathan is a creator we’ve been hoping to have since NIGHTLY NEWS was initially released. All of his Image work is constantly in our top ten sellers, so we’re highly looking forward to the event."

Jonathan Hickman will be signing at Collector’s Paradise Saturday, August 29th from 3:00 – 6:00 PM, preceded by the Comics on Comics taping 1:00 – 3:00 PM. More information is available at http://comicsandcards.net.

Collector’s Paradise has been a mainstay in the Southern California Comic Book scene since 1994. In recent years, the store has focused on offering their customers an exceptional experience that goes beyond collecting comic books, from monthly creator appearances, to the proprietary online subscription manager software, to the recently-opened Art Gallery. The store’s future plans include many new and very different ways to experience the comic book culture. Last year, Collector’s Paradise was picked by fans as the Best Comic Book Store in Los Angeles County, according to an online poll done by Fox LA. 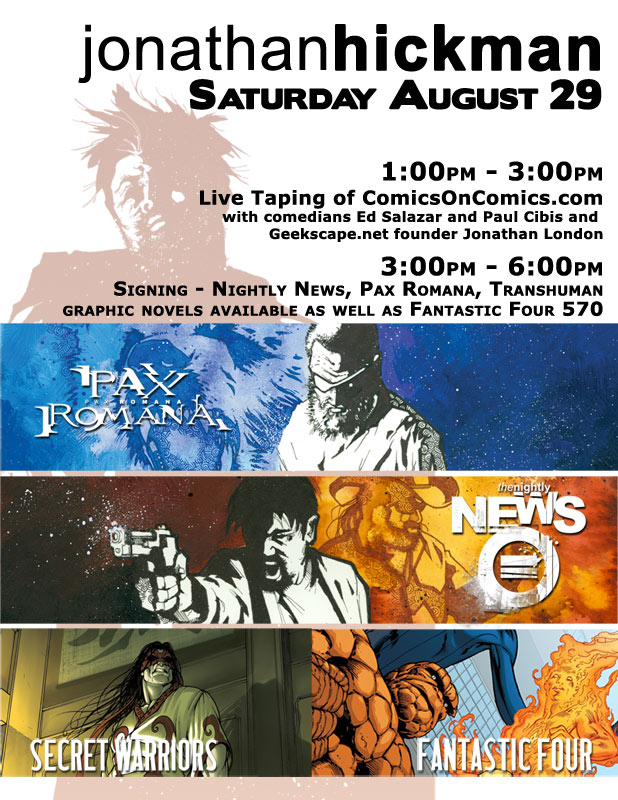