Unlike the hacks who simply throw “whatever” up and in the air and hope it comes together as a “comic book” we professional cartoonists take our jobs seriously. There’s no time for fun and there’s certainly no room for mistakes. It’s a brutal work environment here at IC and if the editors catch you “surfing” when you should be “working” there’s going to be hell to pay. I mean “real” “trouble”. For one they take away your ability to use quotation marks for the rest of your article, but okay! I quote guess unquote I will just have to do my quote best unquote.

Putting out a quality cartoon strip like “JOSEPH!” takes minutes a day. First we begin with the writing. As the writer it’s my job to wake up everyday, pound my head against the bathroom sink and pray to God for the day’s inspiration. After the spots have cleared and I’ve picked myself up from the bathroom floor I then come to this very keyboard and through the power of typing 10 words a minute I am able to pound out God’s inspirational humor in the form of an artist’s script. The first twenty minutes of work is usually drivel like, “David, stop banging your head against the bathroom sink.” at which point I immediately go to the kitchen sink. Later, much later, I return to the keyboard and thus begins the day’s work.

Typically I do not use old fashioned script terms like “panel”, or titles to indicate which character is saying what. The reason for this is the fact that artist Gary T. Becks is not a trained monkey but an actual man. Here’s an example of a script, exactly as I wrote it – no edits. Promise.

p1
Joseph is standing in front of the box office and a teenage girl is behind the window or counter.

I’d like one ticket for that zombie movie, please.

Is that for the later showing?

No, I have to get inside the movie playing now. my kids are in there.

If you already bought a ticket you can in with your stub.

I tried but that little Usher wouldn’t let me in.

Sigh. Just give me the ticket.

Okay. Some might see that as incomprehensible, but once you give them a banana they usually calm down. Gary on the other hand is a friggin’ genius. He’s able to understand my nonsense from p1 as meaning panel 1. 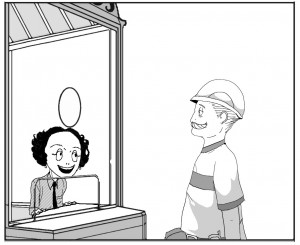 So let’s take a look at what he crafted from my so-called script. 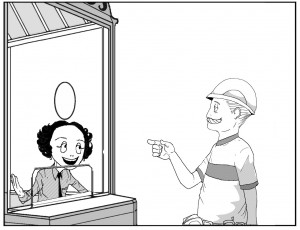 All I had written in the script was “same scene, different expressions.” Despite my mother’s insistence I am not an artist, so I can only imagine this might prove challenging, if not annoying, for most artists. Editors, and many writers, HATE this kind of scripting. Just ask Robert Heske. He’d never write a script like this. But for me this kind of freedom given to the artist absolutely works, and works every single time. To prove this point let’s take a look at panel 3. 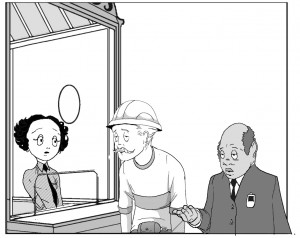 As a reminder, here’s the description:

I tried but that little Usher wouldn’t let me in.

Sigh. Just give me the ticket.

Gary’s work for this panel was a huge surprise to me. My intention for the joke was the girl had misunderstood what Joseph was telling her. She thought he was talking about the performance artist “Usher”. Teenage girls are always thinking about something else when adults are talking to them.

What we see here is a joke that works in two ways. By illustrating the usher as an old dude Gary fit the joke in that Joseph had been waiting a very long time. This is why Gary is a genius. And not a trained monkey.

Now if you’ll excuse me I have to be flogged for using quotations for the word Usher. And here’s the final product. Not that you were wondering. But yeah. That’s how it’s done.

1 thought on “JOSEPH! Behind the Scenes”