Welcome to an all new series here at InvestComics Web Comics. Unlike many, many web comics sites our aim here at IC Web Comics has been to bring you something different. Something you just won’t find anywhere else. With that in mind we’re turning an eye on history and showcasing legends of cartoon strips, to help shed light on how important these people have been on the world of comics. As we explore these legends and their legacies we hope appreciation for their contributions will grow in an age now sorely missing their brilliance. Bill Watterson may not be the first name you think of when you reflect on the legends of cartoonists, but Watterson’s contributions to comics in news papers all across America helped change not only print media but the way in which comics and cartoons were presented. As you read you will see just how much his efforts affected each of us to this day with only ten years of his crazy successful “Calvin and Hobbes”, which remains one of the most popular cartoon strips since its final strip in 1995.

In 1980, Watterson graduated from Kenyon with a B.A. in political science. Immediately, The Cincinnati Post offered him a job drawing political cartoons for a six-month trial period:

My guess is that the editor wanted his own Jeff MacNelly (a Pulitzer winner at 24), and I didn’t live up to his expectations. My Cincinnati days were pretty Kafkaesque. I had lived there all of two weeks, and the editor insisted that most of my work be about local, as opposed to national, issues. Cincinnati has a weird, three-party, city manager government, and by the time I figured it out, I was standing in the unemployment lines. I didn’t hit the ground running. Cincinnati at that time was also beginning to realize it had major cartooning talent in Jim Borgman at the city’s other paper, The Cincinnati Enquirer, and I didn’t benefit from the comparison.

— Watterson explaining his short career with the Cincinnati Post

During the early years of his career he produced several drawings and additional contributions for Target: The Political Cartoon Quarterly. He designed grocery advertisements for four years prior to creating Calvin and Hobbes.

Watterson has said he works for personal fulfillment. As he told the graduating class of 1990 at Kenyon College, “It’s surprising how hard we’ll work when the work is done just for ourselves.” Calvin and Hobbes was first published on November 18, 1985. In Calvin and Hobbes Tenth Anniversary Book, he wrotethat his influences included Charles Schulz for Peanuts; Walt Kelly for Pogo and George Herriman for Krazy Kat. Watterson wrote the introduction to the first volume of The Komplete Kolor Krazy Kat.

Like many artists, Watterson incorporated elements of his life, interests, beliefs, and values into his work—for example, his hobby as a cyclist,memories of his own father’s speeches about ‘building character’, and his views on merchandising and corporations. Watterson’s cat, Sprite, very much inspired the personality and physical features of Hobbes.

Watterson spent much of his career trying to change the climate of newspaper comics. He believed that the artistic value of comics was being undermined, and that the space they occupied in newspapers continually decreased, subject to arbitrary whims of shortsighted publishers. Furthermore, he opined that art should not be judged by the medium for which it is created (i.e., there is no “high” art or “low” art—just art).

Watterson battled against pressure from publishers to merchandise his work, something he felt would cheapen his comic.He refused to merchandise his creations on the grounds that displaying Calvin and Hobbes images on commercially sold mugs, stickers, and T-shirts would devalue the characters and their personalities.

Watterson was awarded the National Cartoonists Society‘s Humor Comic Strip Award in 1988 and the society’s Reuben Award in 1986; he was the youngest person ever to receive the latter award. In 1988, Watterson received the Reuben Award a second time. He was nominated a third time in 1992.

Watterson announced the end of Calvin and Hobbes on November 9, 1995, with the following letter to newspaper editors:

I will be stopping Calvin and Hobbes at the end of the year. This was not a recent or an easy decision, and I leave with some sadness. My interests have shifted, however, and I believe I’ve done what I can do within the constraints of daily deadlines and small panels. I am eager to work at a more thoughtful pace, with fewer artistic compromises. I have not yet decided on future projects, but my relationship with Universal Press Syndicate will continue.

That so many newspapers would carry Calvin and Hobbes is an honor I’ll long be proud of, and I’ve greatly appreciated your support and indulgence over the last decade. Drawing this comic strip has been a privilege and a pleasure, and I thank you for giving me the opportunity.

The last strip of Calvin and Hobbes was published on December 31, 1995.

Watterson opposed the structure publishers imposed on Sunday newspaper cartoons: the standard cartoon starts with a large, wide rectangle featuring the cartoon’s logo or a throwaway panel tangential to the main area so that newspapers pressed for space can remove the top third of the cartoon if they wish; the rest of the strip is presented in a series of rectangles of different widths. In Watterson’s opinion, this format limited the cartoonist’s options of allowable presentation. After his sabbatical year in 1991 he managed to gain an exception to these constraints for Calvin and Hobbes, allowing him to draw his Sunday strip the way he wanted. In many, panels overlap or contain their own panels; in some, the action progresses diagonally across the strip.

In early 2010, Watterson was interviewed by The Plain Dealer on the 15th anniversary of the end of Calvin and Hobbes. Explaining his decision to discontinue the strip, he said,

This isn’t as hard to understand as people try to make it. By the end of ten years, I’d said pretty much everything I had come there to say. It’s always better to leave the party early. If I had rolled along with the strip’s popularity and repeated myself for another five, ten, or twenty years, the people now “grieving” for Calvin and Hobbes would be wishing me dead and cursing newspapers for running tedious, ancient strips like mine instead of acquiring fresher, livelier talent. And I’d be agreeing with them. I think some of the reason Calvin and Hobbes still finds an audience today is because I chose not to run the wheels off it. I’ve never regretted stopping when I did.

So that was the end of Calvin and Hobbes. But what of Watterson himself?

In April 2011, a representative for Andrews McMeel received a package from a “William Watterson in Cleveland Heights, Ohio”, which contained a 6″ x 8″ oil-on-board painting of Cul de Sac character Petey Otterloop, done by Watterson for the Team Cul de Sac fundraising project for Parkinson’s Disease. His syndicate, which since has become Universal Uclick, has said that the painting was the first new artwork from Watterson that the syndicate has seen since Calvin and Hobbes ended in 1995.

We appreciate all the joy you brought to the world. And you are sorely missed. 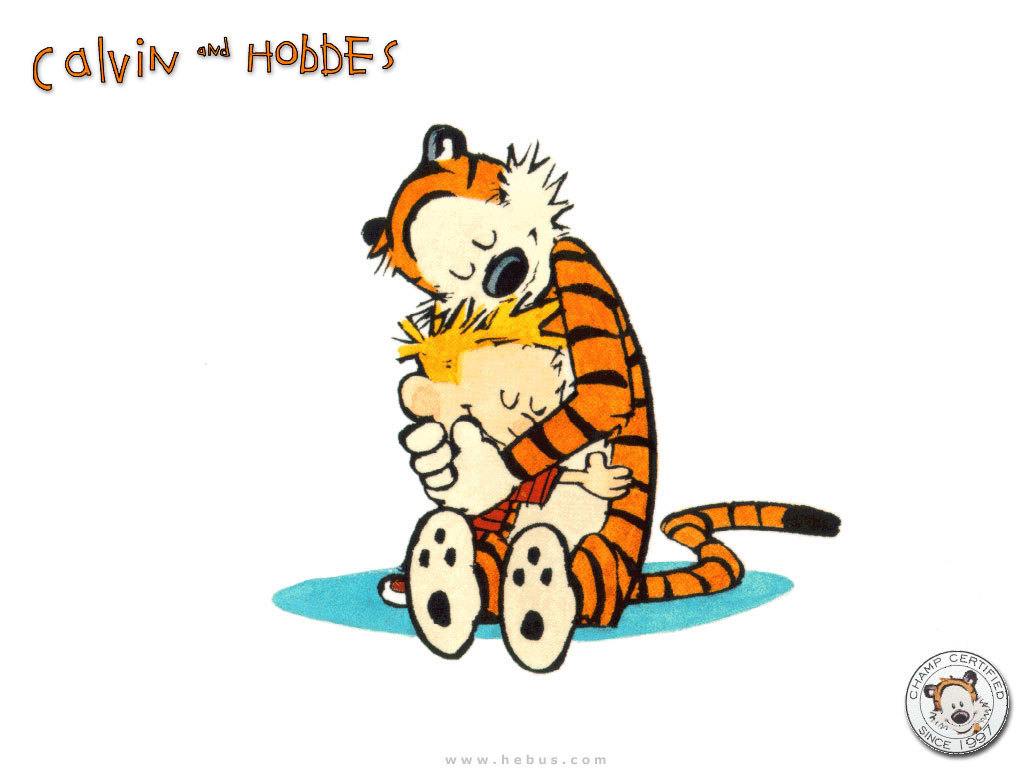