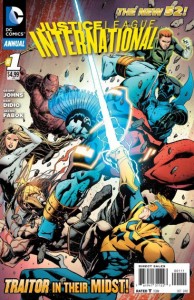 In big news…well, it’s big news if you’re me…Geoff Johns told DC’s blog that after the JLI annual effectively wraps up the series, BOOSTER GOLD will play a central role in the upcoming TRINITY WAR.

JUSTICE LEAGUE INTERNATIONAL ANNUAL #1 sets the stage for some major changes in the JUSTICE LEAGUE universe,” co-writer Geoff Johns teased to THE SOURCE. “Obviously, it’s the last issue of the series, but certainly not the last story for any of the members – especially Booster Gold who ultimately will once again be drawn into the center of the DC Universe as the events of JUSTICE LEAGUE #12 start to change the course of the future.”

“I had a great time working with Geoff on this issue especially one as important as this,” continued DiDio. “It brings an end to certain stories and launches several characters into new and exciting directions.”

“Working with Dan DiDio and Geoff Johns was a great experience and presented me with something different to tackle in my career,” added artist Jason Fabok. “I had a great time drawing the JLI team in this last chapter of their story. What will come next for these characters? What big surprises await the Justice League?  It’s an exciting time to be a DC comics fan!”

“JUSTICE LEAGUE INTERNATIONAL ANNUAL #1 introduces two new members, Olympian and Blue Beetle, who join just in time for the team to implode,” concluded editor Brian Smith. “Several established players quit and not everyone will survive. All this, plus a shocking glimpse into the future of DC COMICS-THE NEW 52.”