Born in Endicott, New York, Hart’s first published work was in Stars and Stripes while he served in Korea as an enlisted member of the United States Air Force. Returning in 1953, he published cartoons in The Saturday Evening Post, Collier’s Weekly and other magazines. Hart’s biggest success, B.C., was created in 1957 and began national daily newspapers appearances on February 17, 1958 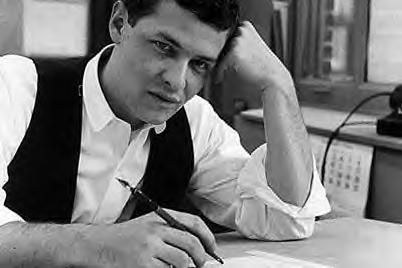 This is a rather tough one for me to write in particular. Due to Hart’s deeply religious points of view, which he was not ashamed to admit nor incorporate into his cartooning. But his contribution to cartooning is undeniable and I cannot shy away from that fact. With that, I want to dive into the controversy first thing.

Hart was raised in a casually religious family, and he attended Christian Sunday School regularly. Although his formal education ended with high school, he was fascinated by the Bible from a young age. In 1977 there was a distinguishable shift in Hart’s spirituality, and Hart and wife Bobby began attending a congregation of the Presbyterian Church in Nineveh, New York. Hart attributed his religious awakening to a father-son team of contractors who installed a satellite dish. Hart’s increasingly deep religious faith, and the staunch political conservatism that accompanied it, came to be the source of considerable controversy in the latter years of his life. In a 1999 interview with The Washington Post, for example, he stated that “Jews and Muslims who don’t accept Jesus will burn in Hell” and that “homosexuality is the handiwork of Satan.” In the same piece, Hart opined that “the end of the world is approaching, maybe by the year 2010.” The lion’s share of controversy, however, came from Hart’s increasing tendency to incorporate his religious and political themes and ideals into his comic strips, especially B.C. Some newspapers refused to print strips with overtly religious themes or, as with the Los Angeles Times, relegated them to the religious section of the newspaper.

Two strips in particular were controversial. The B.C. strip for April 15, 2001, which was Easter, portrayed a Jewish menorah with seven candles progressively burning out as the strip captions ran the words of Jesus Christ. At the end, the outer arms of the candelabra broke away, leaving a Christian cross, with the final panel portraying the opened and empty tomb of Christ. Critics including the Anti-Defamation League and the American Jewish Committee argued that Hart’s strip portrayed replacement theology, that is, the conception of Christianity as supplanting Judaism. Hart offered an apology “if I have offended any readers,” but still thought the strip could increase “religious awareness” and claimed that he had meant the strip to be a tribute to both religions.

Another B.C. strip, which ran November 10, 2003, showed an outhouse with a traditional crescent, which a character entered with a vertical graphic “SLAM”, only to ask, “Is it just me, or does it stink in here?” Critics including the Council on American-Islamic Relations claimed that the combination of the vertical bar and the “SLAM”, as well as the crescent moons both in the sky and on the outhouse, made the strip a slur on Islam. Hart denied that it was anything but an outhouse joke.

“He was generally regarded as one of the best cartoonists we’ve ever had,” Hart’s friend Mell Lazarus, creator of the “Momma” and “Miss Peach” comic strips. “He was totally original. ’B.C’ broke ground and led the way for a number of imitators, none of which ever came close.”

Hart, who also co-created “The Wizard of Id,” won numerous awards for his work, including the National Cartoonist Society’s prestigious Reuben Award for Cartoonist of the Year and an award from the International Congress of Comics.

After his discharge from the military in 1954, Hart worked in the art department at General Electric while selling cartoons on the side. He began reading Charles Schulz’s “Peanuts” and was inspired to start his own strip.

“Caveman gags, for reasons which I still cannot explain, were an obsession in those days,” Hart told Creators. “One day, a friend jokingly suggested I create a strip revolving around prehistoric times.”