The Biggest Comic Book Event In History Begins In April 2012 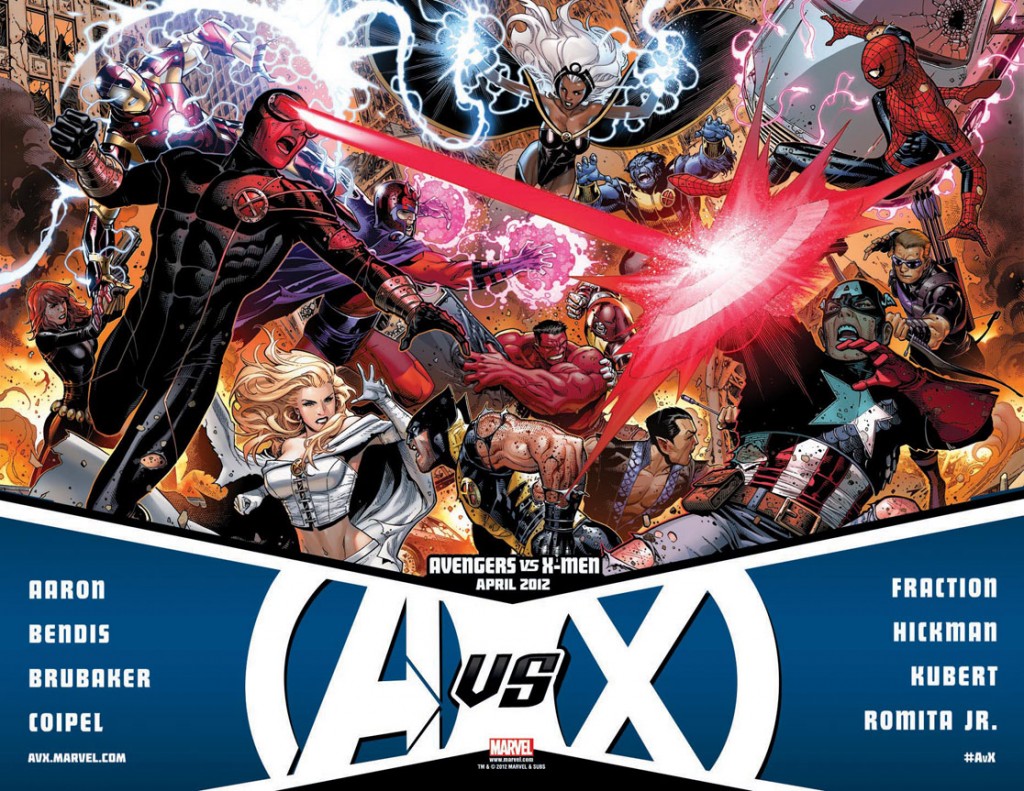 The Avengers and X-Men have learned that the all-powerful embodiment of both death and rebirth  known as the Phoenix Force is on a crash course for Earth…and it needs a new host to unleash its immeasurable power. But what is the shocking decision tied to the Phoenix’s return that will pit the Avengers against the X-Men? And when good friends become bitter enemies, what does this mean for the future of the Marvel Universe?

Shipping twice monthly, this epic twelve-issue limited series will be available in comic stores and on the Marvel Comics app <http://www.marvel.com/marvelcomicsapp>  on the same day-additionally, each print issue of Avengers VS X-Men includes a code for a FREE digital copy of the issue on the Marvel Comics app <http://www.marvel.com/marvelcomicsapp>  at no additional cost to fans or retailers.

“Avengers VS X-Men brings together the most powerful forces in comics for a super hero war like you’ve never seen before and will never see again. We all want to see the best of the best go against each other-Lakers & Celtics; Ali & Frazier; Yankees & Red Sox; and in comics it’s the Avengers fighting the X-Men, ” said Axel Alonso, Editor in Chief, Marvel Entertainment. “We’ve brought together the biggest writers, biggest artists and biggest characters for the biggest story we’ve ever told. This is the kind of high-octane action-packed story
that fans demand while also having a profound effect on every character involved-and reshaping the Marvel Universe in its wake.”
Plus, for the first time ever, fans can watch and take part in the groundbreaking Avengers VS X-Men LIVE Kickoff beginning at 3:00pm ET
today on Marvel.com <http://www.marvel.com>  and http://new.livestream.com/marveluniverse <http://new.livestream.com/marveluniverse> . A unique event produced in collaboration with Livestream.com’s cutting edge streaming services and the Hangout functionality provided by Google+, we’re bringing the writers and editors of AVX directly to the fans. Make sure to follow Marvel on Google+ <http://goo.gl/9l6Jb>   as five lucky True Believers will be chosen to join in on the AVX hangout with their favorite writers and editors! Even if you’re not part of the Hangout, your questions can still be answered via Facebook <http://www.facebook.com/marvel>  and  Twitter <http://www.twitter.com/marvel>  using hashtag #AvX-just make sure to send in your questions before the press conference ends!

You’ve heard It’s Coming-and this April The War Is Here in Avengers VS X-Men #1! All your favorite super heroes enter-and only one team will
emerge victorious!

For more on Avengers VS X-Men, please visit http://avx.marvel.com
To find a comic shop near you, visit www.comicshoplocator.com or call 1-888-comicbook.

Marvel Entertainment, LLC, a wholly-owned subsidiary of The Walt Disney
Company, is one of the world’s most prominent character-based
entertainment companies, built on a proven library of over 8,000
characters featured in a variety of media over seventy years. Marvel
utilizes its character franchises in entertainment, licensing and
publishing. For more information visit www.marvel.com
<http://www.marvel.com>