The Future of Comics is Marvel NOW!

New York. NY—July 6, 2012— The most popular characters. The most acclaimed creators. The most ambitious stories. This isMarvel NOW!.

This Fall, the Marvel Universe heads in an exciting all-new direction, as the industry’s top creators join the top Super Heroes– Iron Man, Thor, Captain America, Hulk, Spider-Man, Wolverine and more– to deliver all-new ongoing series, each beginning with issue #1!Marvel NOW! is the culmination of Marvel ReEvolution, the groundbreaking new initiative to evolve the comic book experience through innovation.

It kicks off  in October’sUncanny Avengers #1, from the superstar dream team of Rick Remender (Uncanny X-Force,Venom) and John Cassaday (Astonishing X-Men, Captain America) and continues with jaw-dropping newMarvel NOW! series nearly every week through February.

“There’s never been a better time to check out comics thanMarvel NOW!” said Axel Alonso, Editor in Chief, Marvel Entertainment. “This isn’t a reboot or a reimagining—Marvel NOW! is all about looking forward, building on our rich history of great stories and delivering new ideas.”

InUncanny Avengers #1, the Avengers and X-Men must join forces to overcome the greatest challenge either team has ever faced, one so devastating that neither can afford to do it alone! Can Captain America’s newly assembled team find a way to peacefully co-exist while also dealing with the game-changing repercussions of Avengers VS X-Men?

“We brought fans the biggest comic book event imaginable inAvengers VS. X-Men and now we’re taking the Marvel Universe to an exciting new place, beginning withUncanny Avengers #1,” said Tom Brevoort, SVP, Executive Editor, Marvel Entertainment. “If you’re a long-time fan, all the stories you’ve read will give you even more enjoyment of what’s happening now—we’re not abandoning our past. But if you’re a new reader, this is where you’re going to learn just why Marvel comics are unlike anything else you’ve ever read. And no character is left unaffected byMarvel NOW!.”

Every comic book bearing the Marvel NOW! branding includes a code for a free digital copy of that same comic on theMarvel Comics app for iOS and Android devices. Additionally, each issue #1 of Marvel NOW! series features special augmented reality content available exclusive through theMarvel AR app – including cover recaps, behind the scenes features and more that add value to your reading experience at no additional cost.

“This is the natural next step of theMarvel ReEvolution, as we evolve every facet of Marvel publishing,” explained Joe Quesada, Chief Creative Officer, Marvel Entertainment. “You’ve seen us craft new digital storytelling formats likeMarvel Infinite Comics and bring added value to our comics with Marvel AR. Now our print comics leap into the future with a cinematic new look for our covers, exciting new designs for our biggest characters and stories that will send you on the kind of journey you can only get at Marvel.”

This October, “Join The ReEvolution” asMarvel NOW! kicks off with Uncanny Avengers #1, ushering in a new era for comics and the perfect jumping on point for new readers. The biggest creators bring you the biggest characters in the biggest stories…and it’s happening NOW!

To commemorate the historic release ofUncanny Avengers #1 on Wednesday, October 10th, participating retailers can host special advance release parties the night before! That’s right, you can experience the biggest new series launch of the year on Tuesday, October 9th at select retailers, who’ll also have limited edition giveaways exclusive to these events.

For more onMarvel NOW!, please visit www.marvel.com and join the conversation on Twitter with hashtag #MarvelNOW. 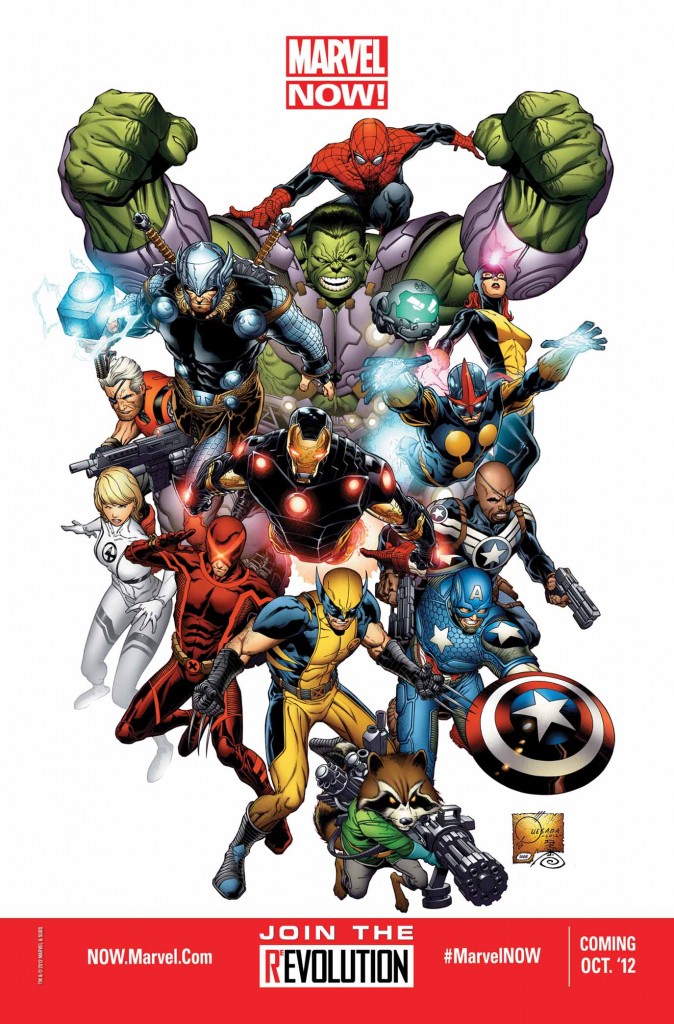