If you missed Iron Man #11, you’ll have a second chance at the awesomeness within!

The New Iron Woman Leads To Another Sell Out!

Marvel is pleased to announce that Invincible Iron Man #11 has sold out at Diamond (though copies may be available at the retail level) and will return with Invincible Iron Man #11 Second Printing Variant, marking the third straight sell out for the series! New York Times Best-Selling author Matt Fraction and superstar artist Salvador Larroca present Tony Stark as he has literally fallen from the top of the world to the bottom of the barrel.  As Norman Osborn basks in the adulation of the public during Dark Reign, Tony Stark fights to piece together his life, or what’s left of it.  Things couldn’t be worse for the world’s most wanted man…until he faces off against an old friend!  This new printing features Larroca’s powerful interior art on the cover, as Pepper Potts takes her new armor for a spin!

Critics and fans alike agree that Invincible Iron Man continues to be a great success:

“Suave and cool…Matt Fraction is doing a good job of making a book about the most hated hero on the planet a pretty fun read.” – Chad Derdowski, Mania.com

“The script is tailor-made to Larroca’s strengths.” – Bryan Joel, IGN.com

Marvel urges retailers to check their orders on all Invincible Iron Man issues as well as all Dark Reign related tie-ins, as the series continues to generate quick sell-outs and great praise.  You won’t want to miss the last gift Tony Stark left for Pepper Potts!  Will Iron Man be able to avoid the malicious grasp of Norman Osborn for much longer?  Don’t miss all the non-stop mechanical mayhem in Invincible Iron Man #11 Second Printing Variant! 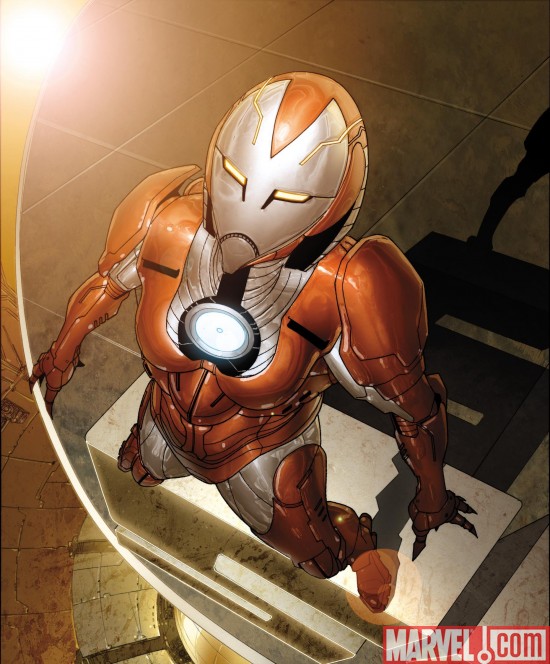