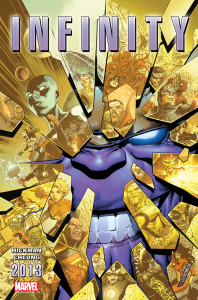 The most dangerous threat in the Marvel Universe – Thanos!

The grandest Marvel Comics event of all time – INFINITY!

This May for Free Comic Book Day, prepare yourselves for the greatest battle for survival ever waged in the Marvel Universe as Marvel marches towards Infinity! In this all-new story by the blockbuster creative team of Jonathan Hickman and Jim Cheung, witness the opening shots of the war that will be heard around the galaxy. Plus, get a sneak peek behind a major Marvel release that hasn’t been announced yet and relive Thanos’ first solo story.

With the entire Marvel Universe on the brink of intergalactic war, no fan can miss this year’s Free Comic Book Day!