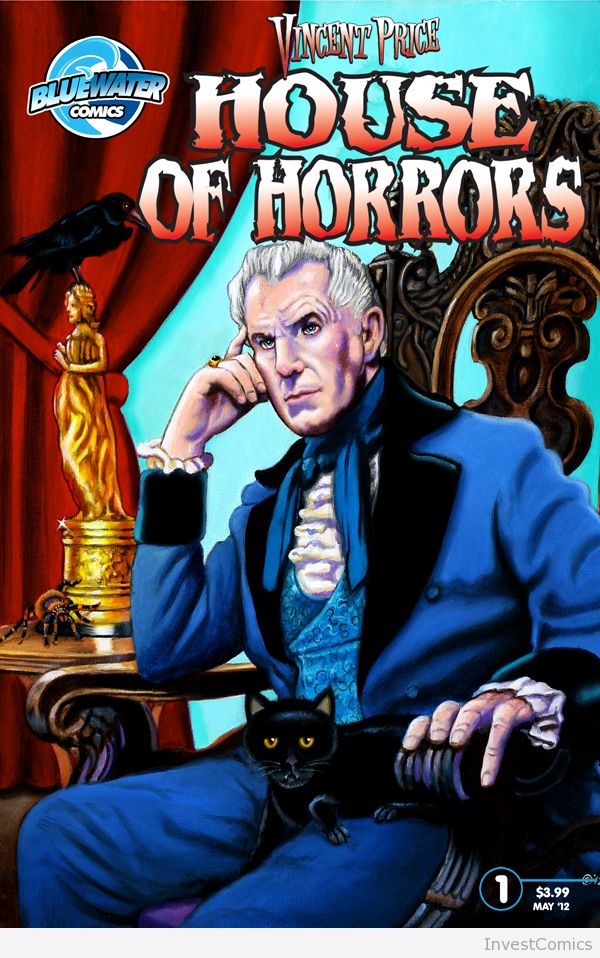 One of classic Hollywood’s most famous scary men, Vincent Price made a name for himself in classic mysteries and thrillers throughout the 1940’s, 50’s and 60’s.

A brand new Vincent Price horror limited series comic book to debut from Bluewater Comics in May; Vincent Price’s “House of Horrors”, will be a four issue mini series.  This series is spinning off from the Rondo Award nominated, “Vincent Price Presents”.

“This new series will focus on one shot stories that will have you at the edge of your seat,” said President of Bluewater Comics, Darren G. Davis. “The stories are all new and have a certain horror element about them that hasn’t been seen before.”

The very first issue starts off with the debut of new writer Jay Katz of the energetic and wildly popular web site InvestComics (www.trendingpopculture.com)With art by a Bluewater mainstay Stefano Cardoselli, and colors by Industry star colorist Jeff Balke. It features a painted cover by LP Dopp.

“I am very proud to have this new Vincent Price series for everyone to enjoy”, said Daren Davis. “It’s going to be a spine tingling experience, so get ready for some great horror stories!”

The comic will be available through comic book stores only and other fine established comic book ordering web sites. Check with your retailer and ask about Vincent Price: House of Horrors #1.

Vincent Price was born on May 27, 1911 in St. Louis, Missouri. His father owned the National Candy Company. His acting career began onstage in London in the play Chicago. He also performed with Orson Welles <http://www.biography.com/people/orson-welles-9527363> ‘s Mercury Theatre. Actor Vincent Price starred as the villain in the 1953 film House of Wax. It was one of the first films shot in 3D and revitalized the horror genre.