Tyrese Gibson capitalizes his Transformers star into some good sales on his Mayhem comic from Image.

Find out more inside.

"The success of MAYHEM is a golden opportunity for all retailers to tap into this new influx of readers and in-store foot traffic that Tyrese brings with him,” Meltdown owner Gaston Dominguez said.  “Tyrese is a 2.0 celebrity who is a marketing workhorse and whose brand spans across movies, music, and TV. Team MAYHEM are in it to win it!  They are sincere and want to put out good products that cater to their fan base and beyond.  Believe me when I tell you that if Tyrese Twitters your store name you will get calls and in-store orders.”

Image Comics President SPAWN creator Todd McFarlane  added, "With the current state of the comic book industry, any new infusion of excitement or customers would be a welcome relief.  Tyrese brings both of those to the table along with his unbridled enthusiasm. Image is looking forward to having a long sustained run with him on MAYHEM and some of the other ideas he’s talked about for the future."

TYRESE GIBSON’S MAYHEM has not only been pushed by Gibson’s own efforts through Twitter and his personal outreach to comics retailers,  but its also been the center of a world wide publicity campaign tied into his starring role in the recent blockbuster film, Transformers 2. Thus far MAYHEM has been featured by CNN, MTV, The Today Show, Complex, USA Today, E!’s Chelsea Lately, Access Hollywood, Essence, among many others. The tour continues as Gibson, along with MAYHEM’s artist, Tone Rodriguez, and co-writers, Mike Le and Will Wilson, will be in attendance during this month’s San Diego Comic Con International at Image Comics, booth #2729. He will also be discussing the future of MAYHEM along with the long awaited unveiling of the eventual collection’s cover by Image Founder and the superstar artist of ALL-STAR BATMAN & ROBIN, Jim Lee, during The Image Comics Show on Friday, July 24th at 11:30 in Room 5AB.

Lee added, "There’s nothing more compelling about a bold, original character than an impassioned team of creators. MAYHEM’s boundless energy starts from the top as whirlwind dynamo creator Tyrese Gibson singlehandedly makes you love the character as if he were your very own betrayed, tragic son seeking redemption. MAYHEM is fresh, fun and most importantly, from the heart."

“I am humbled by the love and support MAYHEM has received from all the legendary comic veterans and trend-setters,” Gibson said.  “To have the personal endorsements of Jim Lee, Avi Arad, Todd McFarlane, Robert Kirkman, Grant Morrison and so many others … it just blows my mind.  I am excited to bring MAYHEM to the die-hard comic book fans, but I am most excited at this opportunity to expose this world to the new generation of comic book fans, who, like me until now have never read a comic book in their lives.  They will find new heroes to embrace and enjoy escapism at it’s best!  This is only the beginning!" 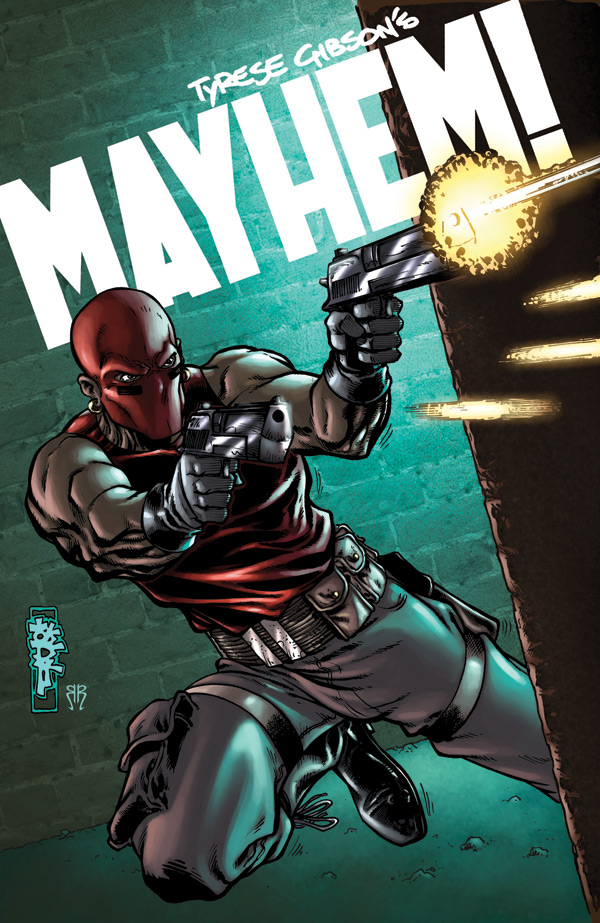