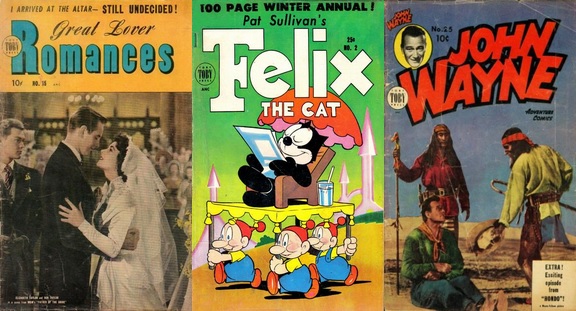 These books have proven to be consistently the most in demand key issues ever and are the best investments long term.

This list only include regular cover mass printed editions.  No variants or limited edition versions included.

This is the first time a yearly comparison has ever been made and the purpose is to show a few things.

First of all it does truly highlight the major key books of every year.  It also shows quickly which titles seems to pop up the most often and are truly the most expensive series to collect.  Some titles are just more collected than others and bring higher $$ amounts even to non-key issues in a run.

Note that some years have lesser keys standing at the front of the line and are for their age a better investment. This can always be seen with most books from the 1950’s which are much more affordable and scarcer than any more recent books.

Toby Press was an American comic-book company that published from 1949 to 1955. Founded by Elliott Caplin, brother of cartoonist Al Capp and himself an established comic strip writer, the company published reprints of Capp’s Li’l Abner strip; licensed-character comics starring such film andanimated cartoon properties as John Wayne and Felix the Cat; and original conceptions, including romance, war, Western, and adventure comics. Some of its comics were published under the imprint Minoan.    Elliott Caplin entered the comic-book field as editor of True Comics for the Parents Magazine Institute. Some years later, he founded Toby Press with reprints of his brother Al Capp‘s popular newspaper comic strip Li’l Abner, a satire built around hillbilly archetypes. The first Toby comic-book series was Al Capp’s Li’l Abner, which began with issue #70 (May 1949), picking up the numbering from Harvey Publications‘ Li’l Abner Comics. It ran 28 issues, through #97 (Jan. 1955) Toby’s second title was the four-issue Al Capp’s Dogpatch Comics, numbered #71, followed by #2-4 (June-Dec. 1949). The first three issues are re-reprintings of Li’l Abner strips that the newspaper syndicate United Feature had published in the omnibus comic-book Tip Top #112-114 (Nov. 1946 – Jan. 1947), while the contents of the fourth issue are uncertain. Following through 1952 were Al Capp’s Shmoo Comics #1-5 (July 1949 – April 1950); Al Capp’s Wolf Gal #1-2 (1951–1952); and a series of pocket-sized, 6.75 x 3.5-inch, one-shot comics produced as premiums for Oxydol and Dreft detergents: Al Capp’s Shmoo in Washable Jones’ Travels; Al Capp’s Daisy Mae in Ham Sangwidges also Cousin Weakeyes, and Al Capp’s Li’l Abner in The Mystery o’ the Cave!!    Toby’s next series was John Wayne Adventure Comics, named after the Hollywood Western star and frequently featuring photo covers bearing scenes from his movies. It ran 31 issues (Winter 1949/1950 – May 1955) and spawned its own Oxydol/Dreft pocket-sized premium, John Wayne: The Cowboy Trouble-Shooter! Further such premiums included Archie in Mask Me No Questions, featuring the Archie Comics teen-humor star; and Paul Terry‘s Terry-Toon Comics (both 1950).     In its brief existence, Toby Press published in a wide variety of genres, including funny animal, with the 42-issue Felix the Cat #20-61 (1951 – June 1955, taking over the numbering from the Dell Comics series), which spawned spin-offs including Felix the Cat 3D Comic Book (1953); Western, with the likes of Gabby Hayes Western, a one-shot starring the movie sidekick, and the 29-issue Billy the Kid Adventure Magazine; war comics such as the 15-issue Tell It to the Marines and the six-issue Monty Hall of the U.S. Marines (no relation to the game-show host); the genre-evident Young Lover Romances and Tales of Horror; the medieval-adventure one-shot The Black Knight, with art by Ernie Schroeder; and even a two-issue comic Captain Tootsie, that starred the heroic mascot of Tootsie Roll candy.  Toby’s final comic, Felix the Cat #61, was cover-dated June 1955.   Some covers bore the logo ANC, standing for American News Company, at the time the country’s largest newsstand distributor.

16 thoughts on “Most Valuable TOBY PRESS comics published each year”