ESCAPE INTO THE FANTASY OF NONPLAYER 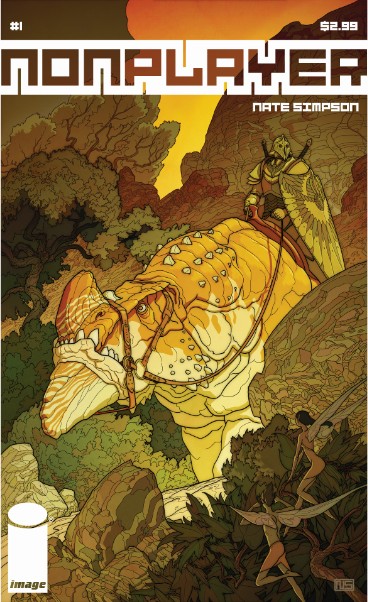 Image Comics carries on its tradition of introducing the best new talent with an all-new title from rising star Nate Simpson. Combining references to massively multi-player online roleplaying games and science fiction/fantasy mainstays with exquisite illustration, Simpson’s NONPLAYER is planned as a six-issue miniseries, with the first installment out in April.
NONPLAYER is the story of Dana Stevens, a young woman who retreats from the dismal workaday world of the future into the digital fantasy realm of Jarvath, where she’s a fearless warrior. Dana is not alone in her pursuits, however, and before long, her adventures begin to cat-and-mouse back and forth between the two worlds.
Prior to NONPLAYER, Simpson made video games come to life for their players in his previous job as a concept artist. After taking a year off to “learn how to make comics,” though, he is quickly establishing himself as not only as a gifted illustrator, but as a storyteller with a wonderfully unique voice as well.
“A comic book is just about the most elaborate thing a person can create without assistance, which sounds like heaven to somebody who’s spent fourteen years in video game development,” Simpson explained. “I’ve had a lot of fun putting all the nuts and bolts of this story together and figuring out how best to approach everything in terms of production, and I can’t wait to share this story with people.”
Added Image Publisher Eric Stephenson, “It’s always a pleasure to link up with a creator as well-rounded and imaginative as Nate. Every aspect of NONPLAYER is so well-considered, it’s like working with an old pro. As first timers go, Nate is one of the most impressive I’ve ever seen.”
Indeed, Simpson has built a panoramic world through sequential art, with each interior page more lovingly executed than the last. The dual worlds of NONPLAYER are depicted with detailed rendering, whether in Dana’s real world or in the lavishly real game world. The overall effect is not dissimilar to the lush artwork found in some of Europe’s best and most loved comics, but with a distinct flavor all Simpson’s own.
NONPLAYER, a 32-page full-color science fiction and fantasy comic will be in stores April 6, 2011, for $2.99. For more information, visit www.nonplayercomic.com.