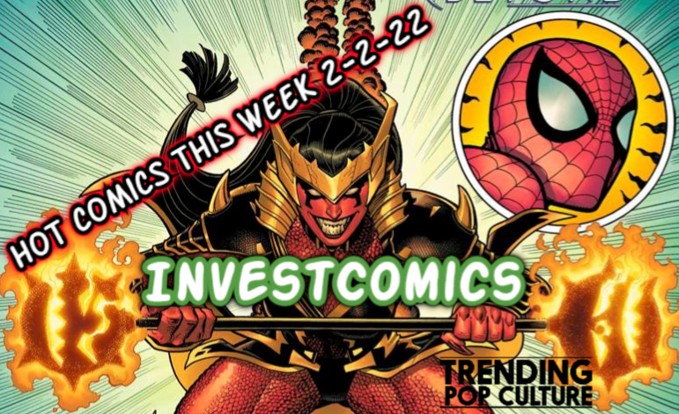 InvestComics/Trending Pop Culture; SINCE 2005.
Here are this week’s top Trending/Spec Comics out this Wednesday 2-2-22.
Please note: All new comic releases can and will change release dates from time to time. Check with your local comic shop on the guarantee of arrival time. If ordering from eBay, check with the seller or post details.
Click on ALL Red-Highlighted LINKS/Comic Covers to BUY/BID from ALL available eBay sellers.

Dark Knights Of Steel #4 – As each issue arrives, they’ll make it to our Hot Picks. As we’ve said about the previous three issues. a whole new DC Universe is being put together here. And it’s a fun ride thus far. Who really knows where the Knights of DC are headed in the future, but this here is all of the ground layers. Tom Taylor writes and Bengal pencils.
Monkey Prince #1 – We gave collectors a heads up about the introduction of this character in our Hot Comics article from May 12th, 2021, and were right. We called the variant cover being the go-to book to speculate; DC Festival Of Heroes: Asian Superhero Celebration #1. It even made our Top 5 Comics for that week as well. So, what do we see exactly for the future of Monkey Prince? We see upside. The creative team here consists of writer Gene Luen Yang and artist Bernard Chang. This alone will be enough to check out this limited series. We believe there will be more Monkey Prince in DC’s future, so get in on MP early. The character could level up eventually. And look for a few first appearances that’ll be important to this character’s growth later on.
Spider-Man #88 – The much-anticipated debut of the new Queen Goblin. Speculation here will probably run its usual course. Sell out, very hot, ridiculous high speculation asking price, and then it’ll tank. Get in early, get the variant character cover, hype it up, sell your copies. That’s the format anyone here should follow. One has to ask themselves, do you see Queen Goblin being a thing a year from now in February of 2023? If your eyebrow raises and you have to think about it, you’ve answered your own question. Maybe we’re wrong here. Wouldn’t be the first time.
Daredevil Woman Without Fear #2 – The second issue of the possible new hit Marvel series.
The X-Cellent #1 – This title is as silly as Totally Awesome Hulk. Still cannot believe that Hulk title was an actual thing. Well, now we have the first appearance of a new Marvel team named X-Cellent. This will sell out though. It’ll be a well-written, thought-out series. With creators like Peter Milligan, Michael Allred, Laura Allred, Ben Percy, and Joshua Cassara attached, yes it’s going to be a good book. Even though the title is a bit silly.

Savage Spider-Man #1 – It looks as though Spider-Man is more spider than he is man in this series. A ton of variants will be released on Wednesday. So many spider bug-like covers to choose from! All the variants are showing a spider-like Spider-Man and not the human we’re all accustomed to. Marvel is really pushing this factor as though comic fans have never seen this before.
Star Wars Halcyon Legacy #1 – A new Star Wars story from Ethan Sacks (writer) and Will Sliney (artist). As always with the new Star Wars comics, a possibility of first appearances.
Until My Knuckles Bleed #1 – The hit Netflix movie gets its own comic book. Creator Victor Santos takes us on the new series journey.
Primos #1 – Primos in English mean Cousins. Cousins #1! Nah, doesn’t have the same ring to it. A new series from Artists, Writers, & Artisans.
Sabretooth #1 – It’s never NOT a good time to have a Sabretooth solo comic. This here from writer Victor Lavalle and artist Leonard Kirk.

Here is the latest LIVE CSSully Twitch video: [Nerds Unite] Chill Saturday stream! Let’s get some Fortnite Dubs, chat & give away some stickers!!
The CSSully Twitch channel airs various LIVE episodes throughout the week and is must watch. LIVE gaming, giveaways, Art, NFT talk/knowledge, contest, shout-outs, in-show purchases, and so much more. Click on the CSSully link and subscribe now.