Detroit, Michigan, March 23, 2011 – Publisher New Baby Productions announces that a graphic novel adaptation of H.G. Wells’ short story, “The Chronic Argonauts,” is currently in production.  Originally written by a 22-year old Wells, and published by the Royal College of Science in 1888, the story is considered to be the first well-developed use of a “time machine” in science fiction.  It predates Wells’ more famous time traveling novel, The Time Machine, by seven years.

“The Chronic Argonauts” begins with the arrival of the mysterious Dr. Moses Nebogipfel to a small Welsh town.  The apprehensions of the simple rural folk eventually cause them to storm the inventor’s workshop in an effort to avenge perceived witchery.  Nebogipfel escapes with one other person, the sympathetic Reverend Elijah Ulysses Cook, in what is later revealed to be a time machine.  After having been missing for three weeks, Reverend Cook returns, aged many years older.  In recounting his experience, he states that he traveled with Dr. Nebogipfel to the years 4003 and 17901, but does not give any details beyond that. “The story ends there.  I think that Wells intended to tell those tales at a later time, but abandoned Cook and Nebogipfel to write The Time Machine,” stated New Baby Publisher, Eric Mullarky, “Over 120 years later, we are finally filling in the gaps and telling the whole story of Nebogipfel and Cook.”

This new adaptation is scripted by writer Jason Quinn.  Quinn has written for many UK comic books, including Barbie, Spectacular Spider-Man Adventures, Ben 10 Alien Adventures, and Action Man. He recently wrote the script for the European Ben 10: Live show, and has just published a Victorian murder mystery, The Palace of Wonder. Robin Cruz, Castaway, a graphic novel that he scripted, is due to be published by Campfire Publishing later this year.

Russ Leach and Tyler Smith, relative newcomers to the comic book industry, are providing the art for The Chronic Argonauts.  Lettering is being done by Charles Pritchett, an industry veteran.  He has lettered many books for Image Comics and IDW Publishing, including Dynamo5, Noble Causes, Eternal Descent, and Husk: The Hollow Planet, and is the co-creator of the upcoming IDW book, The Pound.

Wells’ works, including The War of the Worlds, The Invisible Man, The Island of Doctor Moreau, and aforementioned Time Machine, have been adapted many times over for movies, television, derivative novels, comics, and other mediums. However, “The Chronic Argonauts” is relatively unknown to most.  New Baby is hoping to change that.  Quinn explains; “This is not just another time travel story, it is the granddaddy of all time travel stories. We have recreated the future, from the perspective of two Victorian adventurers, in a way that I hope is reminiscent of the old pulp magazines and penny dreadfuls, while offering something new and refreshing for a modern audience.”  Added Leach; “It manages to be funny, exciting, and thought-provoking without losing that core comic strip tale appeal.” 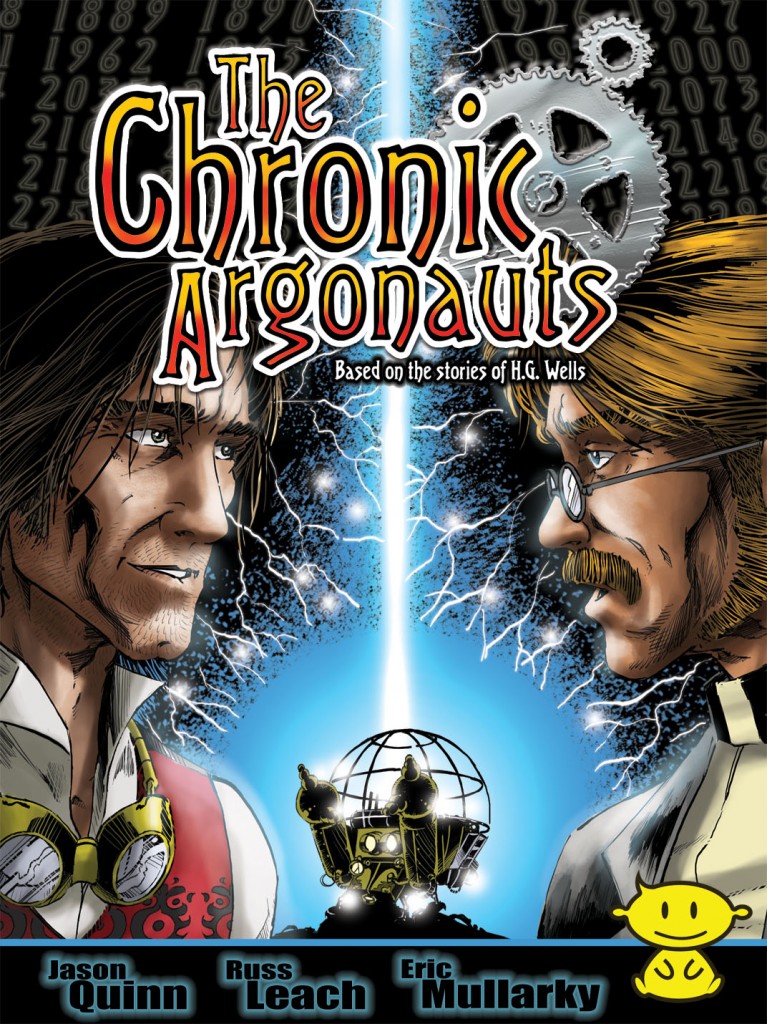 The Chronic Argonauts is scheduled for a late 2011 release.  Project updates will be posted on the project web site, http://www.ChronicArgonauts.com.

New Baby Productions is an independent comic book publisher formed in 2008 by Eric Mullarky with the intent to self-publish his Elemental Fources mini-series. The follow-up, Elemental Fources: Brothers in Arms, was released in 2010.