Our friends/sponsor at InvestComics; Comic Link recently sold a CGC Graded  10.0 New Mutants #98. Read their release after the jump.

What collector doesn’t own this comic book? How many New Mutants #98 comics exist on the walls of every comic shop or comic convention in the world? Hey it was the 90’s! Well without giving an exact number of copies available in existance because we’d probably be off a tad, the rough estimate is……A LOT! But the question that really needs to be asked about one of the most sought after modern books in today’s maket is, do you own the Gem Mint condition New Mutants #98 featuring the first appearance of everyone’s favorite Merc; Deadpool? A CGC graded 10.0?

So what does a 1991 Gem Mint CGC 10.0 New Mutants #98 sell for these days? How about a cool $15,449?! That’s a nice payday! Check out what Comic Link had to say about the sale after viewing the beauty of the CGC 10.0 below. And PLEASE visit Comic Link to bid on some amazing auctions like this one! Click on any of the RED Comic Link words to check them out! Or click on their ad to the left of this page! Way to go Comic Link!! 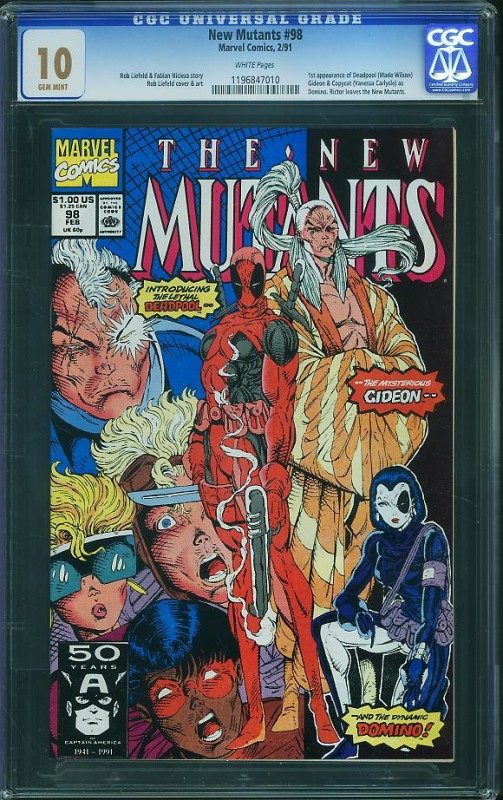 ComicLink Comments: This outrageously rare CGC 10 is now the single highest graded example of this extremely popular modern Marvel key. Perhaps no other book represents the excitement (and excess!) of 1990s comics as well as New Mutants #98. This book was creator Rob Liefeld’s paramount release, introducing his most lasting creation and one of the most popular Marvel characters to emerge in the last 30 years — Deadpool. The motor-mouth mercenary has gone onto a highly successful solo career in comics, an silver screen appearance in the X-Men Orgins: Wolverine feature film and rumors continue to circulated that the character is on the shortlist for his very own feature film. If that does occur it seems likely that Deadpool’s popularity with the general public will only expand. This premiere rank already ranks among the most sought after Moderns for collectors of the era and the offering of this singular CGC 10 is an event!

In the past 12 years, CGC has graded over 3700 examples of New Mutants #98. Of those, a full 1000 have been graded at the 9.8 NM/MT tier. That means that this unique CGC 10 is 1000 times scarcer than a 9.8! It doesn’t stop there though. CGC has also certified 8 examples at the CGC 9.9 MT tier. These near pristine examples are exceptionally coveted relative to there age and represent just .2% of the population of NM 9.8s ever graded. This book is 8 times scarcer than a 9.9! The chance to own a single best example of a Modern key of this significance is virtually unknown. There have to be very few cases where there is only a single best example of a key of this era graded and it is perhaps a unique circumstance. CGC has been very stingy with 10s, even for books from the 1990s, so this seems likely to remain a standout item for the advanced collector for years to come.