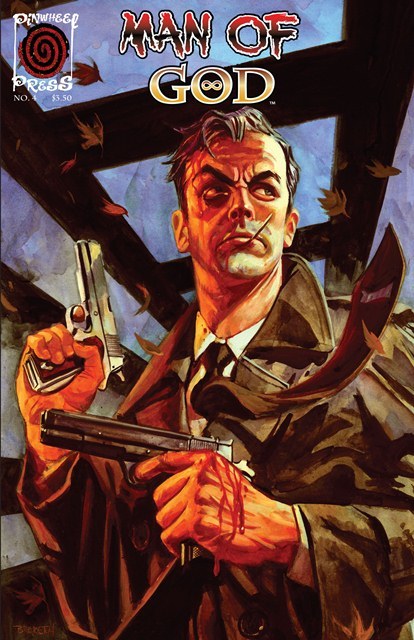 Louisville, KY — April 24, 2013 — Today Pinwheel Press announced the start of its Kickstarter offering to cover the printing costs for issues 4, 5 & 6 of the current series. Issues 1, 2 & 3 were published in 2012 and distributed on the national level through Diamond Comics to comic book specialty shops.

Rewards include full sets of the comic, original art interior pages, original art covers, one of a kind sketch editions, and digital downloads.

Issues 4 and 5 will premiere at Derby City Comic Convention on June 29th in Louisville, KY. Yvel Guichet (artist), Craig Partin (writer), Stu Berryhill (inker) and Jonathan Swinney (letterer) will all be at the convention to celebrate the release.

Man of God #1 can be downloaded for free at: http://www.mediafire.com/view/?ua6avcy1aa1skac

The kickstarter can be accessed at:

Joined by penciller Yvel Guichet (DC, Dark Horse, Valiant) and cover artist Dan Brereton (The Nocturnals) they began work on the long gestating Man of God. A supernatural horror mystery set over the backdrop of a brewing mob war. Man of God is a dark, often violent, tale of redemption and the quest for the truth.

Pinwheel Press and Man of God are trademarks of Craig Partin in the United States and/or other countries.