Ramiro, Rock Vulture, a brand new web comic by South African creators David Edwards (art and design) and Arno Hurter (scripts and lettering), has been selected by InvestComics President Jay Katz to be carried on his company’s website within the IC Web Comics Section.

“We’re thrilled and flattered,” the South African duo responded. “Ramiro has only been hatched and around for a week and he’s already evoked a massive and overwhelmingly positive response. This bodes well for the future…”

The strip’s eponymous character is a rock vulture with attitude, appetite and a real lust for life. He finds himself at the center of a gigantic cast of characters, both animal and human, fauna, insect and flora, and always coming up trumps. Well, mostly.

“The strip relies heavily on gallows’s humor,” David states. “With the odd bit of poignancy and an emotional depth seeping through. Our mission statement is: anything goes, as long as it’s interesting or funny. Sometimes hopefully both.”

“Ramiro is a classic anti-hero,” Arno adds. “He’s a scavenger, a bald and butt-ugly opportunist of the worst kind, but he’s also soulful, compelling and strangely enough, oddly likeable. People are attracted to characters that are rough around the edges, yet who are also colorful, consistent and true (at least to themselves). Ramiro has all these qualities in spades. He’s a great catalyst for funny observations and situations. It’s like lighting a match near a pocket of methane gas and watching the Fourth of July erupt in a panel near you.”

Upon being asked how he felt about recent developments, Ramiro, in between gulping strips of scavenged meat from an unidentifiable carcass and taking a few frenetic stabs at his terrified creators, snarled a surly, “No comment,” after which he tried loosening the brake cable on a nearby stationary car.

Please join Ramiro on his regular new InvestComics’ home for belly laughs, drama, escapism and the occasional bit of food for thought.

Arno and Dave hope to carry on his carrion adventures for years yet to come. 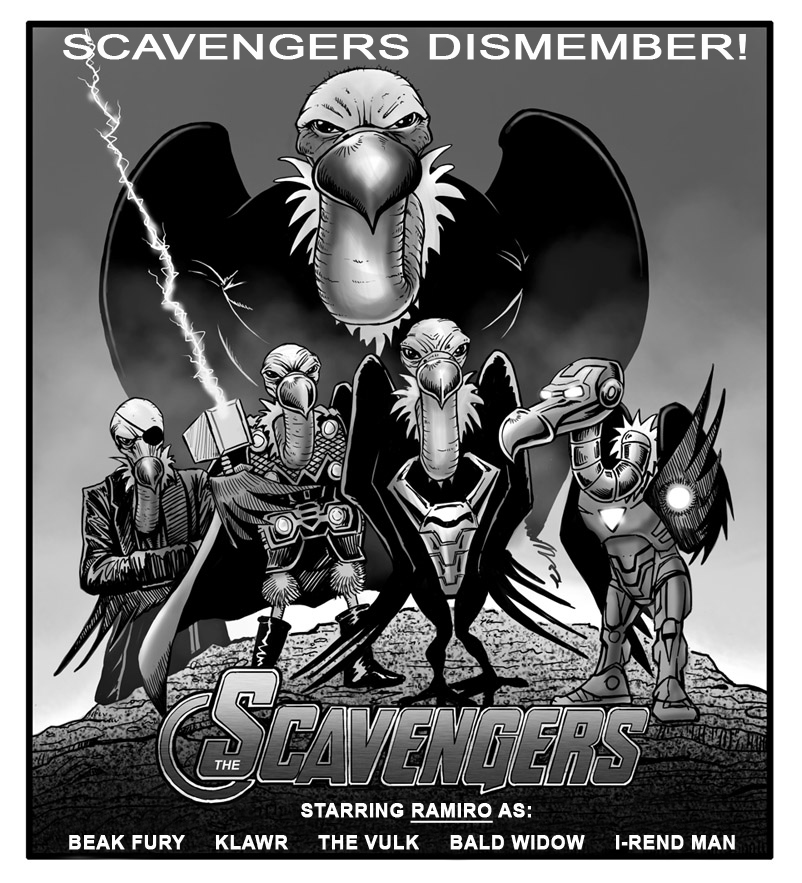 2 thoughts on “RAMIRO TO BECOME A REGULAR ON INVESTCOMICS’ WEBSITE”