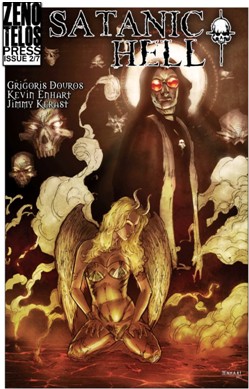 On August 18, Zeno Telos Press will release Satanic Hell #2, the second issue of seven. The digital comic series follows the metal band Satanic Hell as they work their way through the dystopian state of Texas, now run by a council of religious fanatics. Issue #1 will be made available for free on the same date.

Issue 2: Satanic Hell plays their first gig in Texas to a packed and enthusiastic crowd. Despite misgivings from Exodus, the band warms to Texas as it realizes its music and image have become a hit in the repressed state. While Death Priest, Dante and Exodus have some fun in their new surroundings, the Texas Council of Churches grants Reverend Scudder “the authority to do whatever God deems necessary” to stop the tour and the spread of their growing fan base.

(PDF/CBZ). Readers can find the comic for purchase through SatanicHell.com or directly from each platform.