S.H.I.E.L.D. #1 Third Printing Variant will be coming your way! 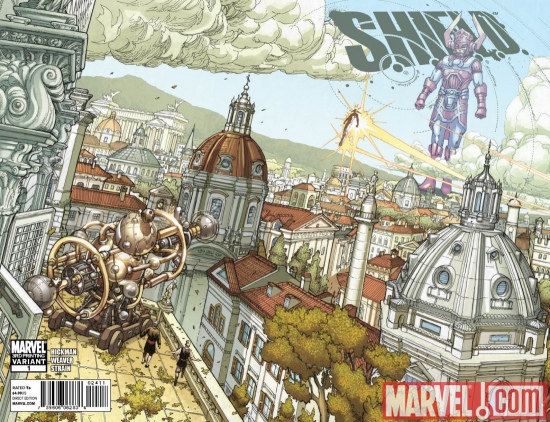 The
Unstoppable S.H.I.E.L.D. #1 Goes Back To Press For A Third
Time!

Marvel is pleased to announce that the hottest new
release of the year, S.H.I.E.L.D.
#1, has sold out for a second time at Diamond (though copies may
still be available at the retail level) and will return with S.H.I.E.L.D. #1 Third Printing Variant! The
red hot creative team of writer Jonathan Hickman and artist Dustin Weaver deliver one of
the most groundbreaking and acclaimed comics of the decade! At long last, the
secret history of the Marvel
Universe is revealed! Long before the Avengers were battling evil, the
planet was under the protection of S.H.I.E.L.D.!

"Dustin Weaver certainly turns in some impressive
designs, including an astonishing view of the underground city, a bevy of crazy
costumes that all seem to involve giant helmets, and a ton of crazy technology
from different eras." – Matthew J. Brady, ComicsBulletin.com

"Jonathan
Hickman and Dustin Weaver (and colorist Christina Strain, who really shines on the issue) come
together to give us an intriguing prelude to what promises to be a very
interesting series…" – Brian Cronin, ComicBookResources.com

"S.H.I.E.L.D.
#1 is an epic read that stands firm against mediocrity and slays it
with an outstretched hand and a mighty arm. With gorgeous art and near-lyrical
writing that cuts to the secret heart of the Marvel Universe, this is an opening issue that really
does deserve all the hype." – David Pepose, Newsarama.com

Marvel urges retailers to keep their eyes peeled for
upcoming S.H.I.E.L.D. issues as
the first issue continues draw praise and fans are on the edge of their seats
waiting for more! Who was the first to repel the ferocious might of Galactus,
the World Eater? How did S.H.I.E.L.D. evolve into the organization it is today?
Find out in S.H.I.E.L.D. #1 Third Printing
Variant!