Marvel is pleased to announce that S.H.I.E.L.D. #2 has sold out at Diamond (though copies may still be available at retail level) and will return with S.H.I.E.L.D. #2 Second Printing Variant! Eisner Award nominee Jonathan Hickman and rising star artist Dustin Weaver continue their exploration of the secret history of S.H.I.E.L.D. and the Marvel Universe! Long before the heroes of the modern age were saving the galaxy from certain doom, a group of historic figures such as Da Vinci, Newton , Nostradamus, and Galileo were safeguarding the fate of humanity! S.H.I.E.L.D. #2 Second Printing Variant also features Weaver’s lush interior art on the cover!

See what critics are raving about!

“The whole set-up is so intriguing how could you NOT keep reading? Weaver’s brilliant artwork certainly helps in this regard, of course, as there are a few pages where he just blows the reader’s mind…”-Brian Cronin, ComicBookResources.com

“I do love it when my comics are incoherent and insane.  Just gives the reader more to digest and decipher before the next issue comes out!”-Jameson Steed, FirstComicsNews.com

Who is the Night Machine and why is he running from Nathaniel Richards and Howard Stark? How does Leonid fit into DaVinci’s plan? Find the answers to these questions and more in S.H.I.E.L.D. #2 Second Printing Variant!

Pencils and Cover by DUSTIN WEAVER 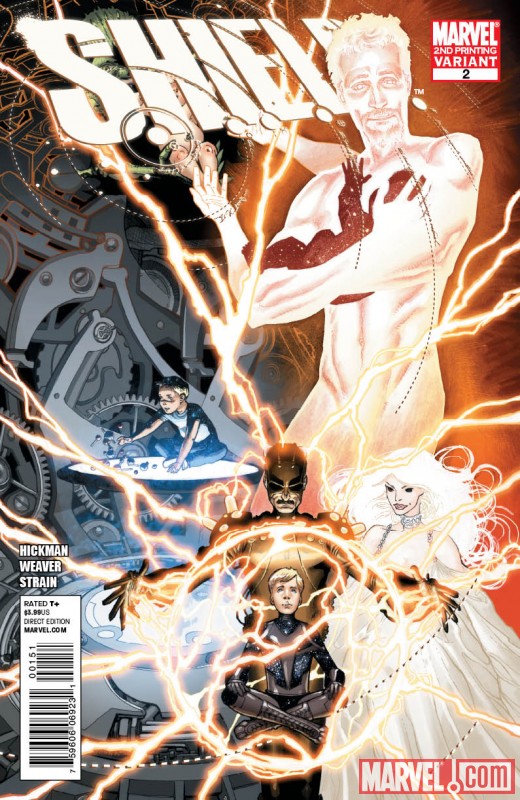