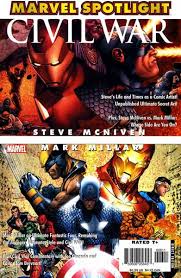 Speculation surrounding the next Cap film just got crazy with the announcement that Iron Man will be a cast member.  It seems Civil War is currently the event most people believe Marvel Films will adapt next.  While the story they use will probably be much different from Millar’s tale you can expect anything key to start getting scooped up now.  Variants from the mini are highly prized but if an event can have a first appearance this is it!