Image Comics goes to war this March with CARBON GREY. Check out the awesome cover! 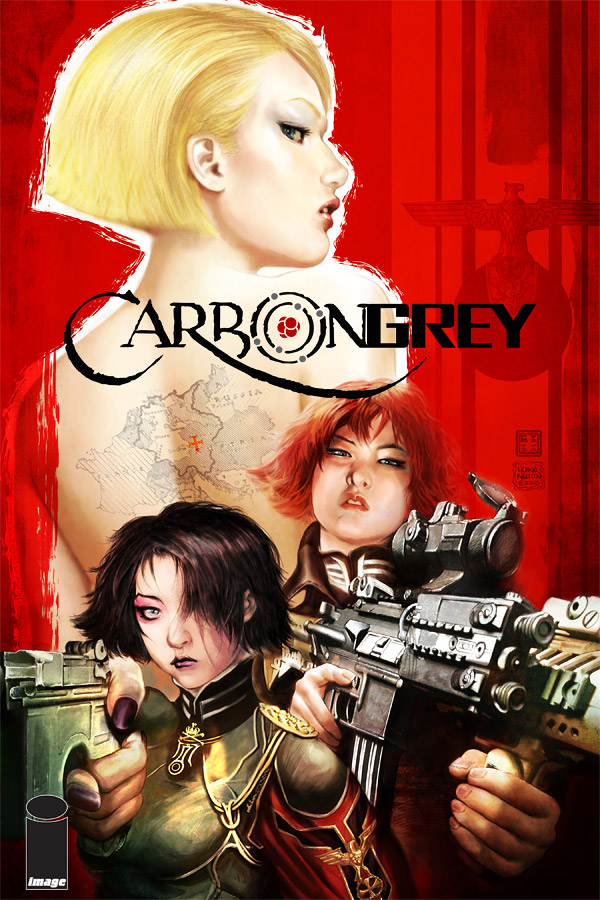 Berkeley, CA – 4 January 2011 – At the birth of the industrial age, a great war is raging. Sister hunts sister as gods are betrayed and enemies ascend to power…
In March, Image Comics enters the maelstrom with the release of CARBON GREY #1, a stunning foray into our world’s secret history. Hoang Nguyen (Punisher War Zone, Metal Militia), Khari Evans (Shanna the She-Devil), Paul Gardner, and Mike Kennedy (Aeon Flux, Lone Wolf and Cub 2100) pen the thrilling tale. The indescribably gorgeous artwork for the series is courtesy of Nguyen, Evans, and Kinsun Loh.
“CARBON GREY has been an eight-year journey, a true labor of love,” says Nguyen. “We’ve been consumed with this project, and we’re so happy that Image Comics is helping us get it into readers’ hands. I hope readers will feel the same passion we do for the book.”
Image Comics Publisher Eric Stephenson adds, “I’m really happy we’re finally releasing CARBON GREY. Jimmy Palmiotti introduced me to Hoang at WonderCon last year, and I picked the book up on the spot. The amount of dedication and craft on display in the pitch was nothing short of astounding: The beauty and detail in the art, the freshness of the story — it just blew me away — and I’m thrilled that a year later, we’re able to share this wonderful project with fans everywhere.”
For generations, the Sisters Grey have protected and counseled the Kaiser, ruler of Mitteleuropa. As civilization spirals into its first truly global war, Giselle Grey stands accused of assassinating the man she was born to protect. Pursued by her sisters, including twin Mathilde, and hunted by the enemy, Giselle must unravel the prophecy of the Carbon Grey before history itself is rewritten.
CARBON GREY #1 (JAN110554), a 32-page full-color comic book for $2.99, will be in stores March 2, 2011.
Image Comics is a comic book and graphic novel publisher founded in 1992 by a collective of best-selling artists. Image has since gone on to become one of the largest comics publishers in the United States. Image currently has five partners: Robert Kirkman, Erik Larsen, Todd McFarlane, Marc Silvestri and Jim Valentino. It consists of five major houses: Todd McFarlane Productions, Top Cow Productions, Shadowline, Skybound and Image Central. Image publishes comics and graphic novels in nearly every genre, sub-genre, and style imaginable. It offers science fiction, romance, horror, crime fiction, historical fiction, humor and more by the finest artists and writers working in the medium today. For more information, visit www.imagecomics.com.