This detailed critical overview of Lee’s life and career unflinchingly
deals with still-open questions about who really “created” Marvel’s best known
characters; scripter Lee, or illustrators like Jack Kirby and Steve Ditko,
who’ve disputed their former boss’ recollections as to who deserves the most
credit, not to mention compensation, the bulk of both having long since been
claimed by Stan Lee. Written by pop culture historian and San Diego Reader
columnist Jay Allen Sanford, this visual history of Marvel’s eventual empire
is bound to institute much discussion, and possibly contention, in both the
comic industry and mainstream trade press. 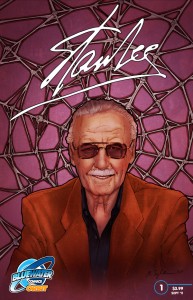 To make sure you get your copy of “Orbit: Stan Lee”, contact your local
comic book store to pre-order it. To find a comic book store near you go to
www. comicshoplocator.com. The standard 22-page issues retails for $3.99. It
will be available at all comic book retail outlets.

“We are launching ‘Orbit’ with a skew towards a more male demographic. Said
publisher Darren G. Davis. “When we weighed the possibilities of featuring
people like Stern, LeBron James, Gary Gygax and JRR Tolkien into our
existing titles, the tone and tenor didn’t match. Their enduring popularity and
contributions to popular culture are worthy of coverage, but they needed a
different voice in which to present the material. ‘Orbit’ fits that bill”

For more info about this project go to Bluewaterprod.com or
http://stansbackformore.com/

High-resolution images, and interview opportunities are available upon
request.

Bluewater aims to unite cutting-edge art and engaging stories produced by
its stable of the publishing industry’s top artists and writers.