Welcome back to our new weekly feature, Start Me Up! Every week we’re going to feature a different comic book or comic book based Kickstarter project that we find interesting. We are going to include all genres and all types of projects, from low goal Indie books to high goal books and projects from well known creators. Our purpose is to clue you in on some cool books that we think deserve your attention and could use your funding dollars. We will also review the rewards and products that we receive from successfully funded Kickstarters that we contribute to, and we encourage you to send us your own reviews as well. Remember, we are only giving our opinions on what Kickstarter projects we think look interesting, and we can’t guarantee any certain outcome or satisfaction for any project that you decide to help fund.

This week, we have a Kickstarter that I am INCREDIBLY excited about: Code Monkey Save World, from 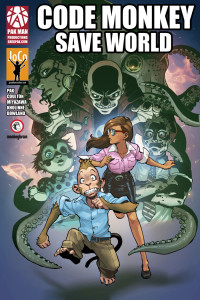 Jonathan Coulton, Greg Pak, and Takeshi Miyazawa. You’re probably already familiar with all of these names, but if not, let me give you a brief refresher.

Jonathan Coulton is a singer/songwriter best known for his “geek culture” music, most notably the songs”Still Alive” and “Want You Gone” from mega-popular video game hits “Portal” and “Portal 2”. He was recently in the news because the television show “Glee” was accused of blatantly ripping off his acoustic cover of the Sir Mix-A-Lot classic, “Baby’s Got Back”. Fans of geek music are probably also familiar with many other iconic Coulton songs, such as “Code Monkey” (which is obviously the inspiration for this Kickstarter), Re: Your Brains, and Creepy Doll. Basically, if you haven’t heard his music, you’re really missing out. Jonathan Coulton is a genius!

Greg Pak is a well respected comic book writer, known primarily for his work for Marvel Comics, including such classics as Planet Hulk, Incredible Hercules and World War Hulk. He is also the writer for the highly anticipated Batman/Superman series, coming soon from DC Comics.

Takeshi Miyazawa is a manga-inspired artist known for his beautiful work on Marvel’s Runaways, Spiderman Loves Mary Jane, and Sidekicks, from Oni Press.

If those resumes don’t have you drooling over this project already, here’s a little idea of what “Code Monkey Save World” is about. Greg Pak is going to take the stars of Jonathan Coulton’s most beloved songs, including Code Monkey himself and the lovesick villain from Skullcrusher Mountain, and have them team up to save the world and (hopefully) get the girls that they pine after in in those very songs. Along the way, they’ll encounter many other familiar characters from Coulton’s imagination, along with a few others created just for this project.

If you’re already a fan of Coulton’s music, then I’m sure you’re as excited as I am about all of this. If you’ve never listened to his music, then I suggest that you go check it out. Look him up on YouTube. Go ahead, I’ll wait. Seriously.

Oh, hey! You’re back! You were gone for a while. Listened to every Jonathan Coulton song you could find, didn’t you? See? Wasn’t that awesome? I totally told you so. And you’re welcome.

Now, back to the Kickstarter, and why I’m so excited about it. The song “Code Monkey” holds a special place in my heart. A few years ago, I was at Dragon*Con, and I ran into a girl I hadn’t seen in several years. She was originally from Louisville, where I still lived at the time, but she had been living in Atlanta for a few years. She had just gotten divorced and was about to move back to Louisville, and the odds of me running into her at a convention as large as Dragon*Con, hundreds of miles from home, years after I’d last seen her, and mere days before she was moving back to Louisville, were about a billion-to-one. We hung out all weekend, and it just so happened that the video for “Code Monkey” was playing every 30 minutes or so on Dragon*Con TV. By the end of the weekend, it pretty much officially became our song. Fast forward to five years later, and we’re now married and living in Florida. The world works in mysterious ways, doesn’t it?

Enough sappy stuff. Let’s look at a few of the different reward tiers offered for Code Monkey Save World:

For a paltry $5, you get a free digital download of a brand new Jonathan Coulton song inspired by “Code Monkey Save World”!

How about ten bucks? Would you believe you’ll get a digital package containing every song that inspired the “Code Monkey Save World” project, plus the brand new song? Well believe it, folks!

For only fifteen American dollars, you’ll get all the music listed above, PLUS digital downloads of all four chapters of “Code Monkey Save World” from Monkeybrain and Comixology, as they’re released!

Now, say you skipped Starbucks a couple of times this month, and you have an extra $25 in your wallet. Well that gets you all of the music I mentioned before, plus the digital book downloads, PLUS a hard copy of the trade paperback! Or if you can scrape together another ten bones, for only $35, Jonathan Coulton and Greg Pak will sign that very same trade paperback?

If you’re willing to scratch together fifty bucks, there are several options for you involving coffee mugs, posters, “challenge coins”, t-shirts, and every $50 pledge includes a signed trade paperback.

The rewards get bigger and better from there, including the full Jonathan Colton library of music, nearly allof Greg Pak’s comics signed by him, custom voice mail messages from Pak or Coulton, original art, a live performance, and a really bitchin’ Code Monkey figurine! There are tons of great reward levels to choose from that will appeal to any budget. Don’t believe me? Go take a look for yourself. I haven’t lied to you yet, have I? 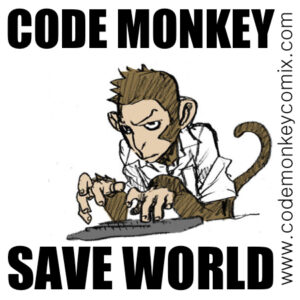 The original goal of $39,000 has already been blown out of the water, and these guys are adding bonuses and stretch goals on an almost daily basis. Since the pledges have already broken the $200,000 mark, Jonathan Coulton is going to record an entire new album of acoustic versions of all the songs that inspired the project, and it will be included as a free digital download for all pledges of $15 or more. Also, the book itself has been bumped from 60 to 96 pages! Every single tier gives you unbelievable bang for your buck. This is an incredibly well thought out Kickstarter, and I think it would be a wonderful project for a first time backer. They obviously don’t need your money at this point, since it’s such an overwhelming

success, but you’ll be doing yourself a huge favor by being a part of such a fantastic book. I mean, who wouldn’t want to be partially responsible for bringing such fantastic music to life in a beautifully written and drawn comic book? Who hasn’t thought to themselves “damn, this song would make a great book/movie/comic/tv show”? Well now’s your chance to help make that happen, true believer!

To read more about Code Monkey Save World, or to contribute you can click HERE

And who knows…maybe Code Monkey and his Big Warm Fuzzy Secret Heart will be there when you find your true love, as well.

5 thoughts on “Start Me Up! Code Monkey Save World”