Super Dinosaur #1 Sells Out Again, Goes Back to Press for Third Printing

BERKELEY, CA — 11 April 2011 — Following in the footsteps of its sellout first printing, the second printing of SUPER DINOSAUR #1 has sold out at the distribution level a week in advance of its on-sale date and is heading back to press.

Written by Robert Kirkman with art by his ASTOUNDING WOLF-MAN collaborator Jason Howard, SUPER DINOSAUR is an all-ages series created by the duo with their own children in mind in an effort to introduce kids everywhere to the joys of reading comic books. To drive that point home, Image released the SUPER DINOSAUR ORIGIN SPECIAL for Free Comic Book Day 2011, featuring a special story that picks up right where SUPER DINOSAUR #1 leaves off.

“We’re really excited people are responding to SUPER DINOSAUR the way they are,” Kirkman said. “I did a signing at Golden Apple on Free Comic Book Day, and it seemed like the book was a huge hit with readers of all ages!”

Image Publisher Eric Stephenson added, “Since coming to Image, Robert has been a powerhouse of ideas, but this is the first time he’s done something with the potential for broad appeal that SUPER DINOSAUR has, and it’s fantastic to see it pay off so well. It’s such a fun concept and far from just being a ‘kids’ comic,’ it’s a true all-ages book in the sense it can be enjoyed by virtually anyone.”
The third printing of SUPER DINOSAUR #1 (MAR118293), a 32-page color comic book priced at $2.99 is available for re-order now with an in-store date of June 15. Meanwhile, SUPER DINOSAUR ORIGIN SPECIAL (MAR110518) will be in stores May 18, followed a week later by SUPER DINOSAUR #2 (MAR110601) on May 25.
ABOUT IMAGE COMICS
Image Comics is a comic book and graphic novel publisher founded in 1992 by a collective of best-selling artists. Image has since gone on to become one of the largest comics publishers in the United States. Image currently has five partners: Robert Kirkman, Erik Larsen, Todd McFarlane, Marc Silvestri and Jim Valentino. It consists of five major houses: Todd McFarlane Productions, Top Cow Productions, Shadowline, Skybound and Image Central. Image publishes comics and graphic novels in nearly every genre, sub-genre, and style imaginable. It offers science fiction, romance, horror, crime fiction, historical fiction, humor and more by the finest artists and writers working in the medium today. For more information, visit www.imagecomics.com. 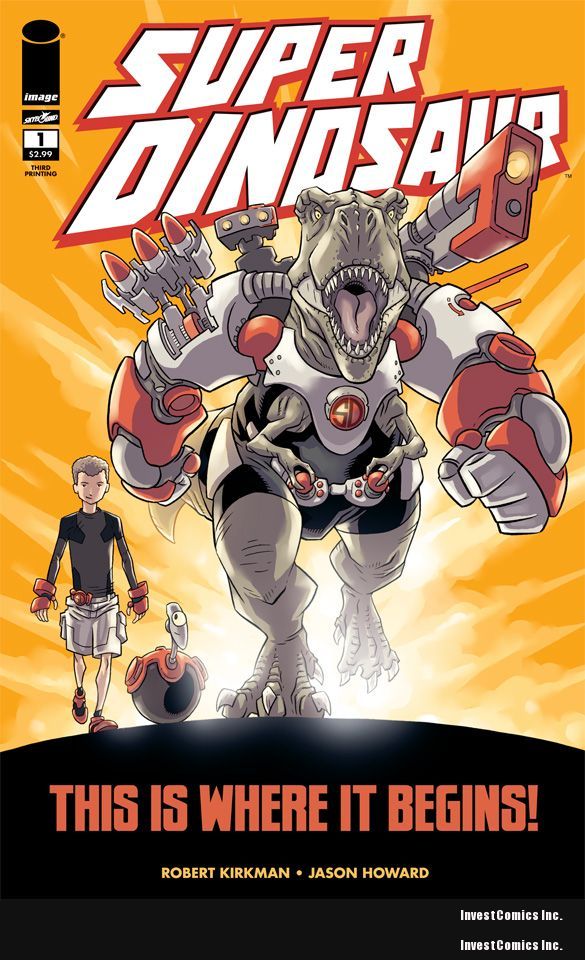