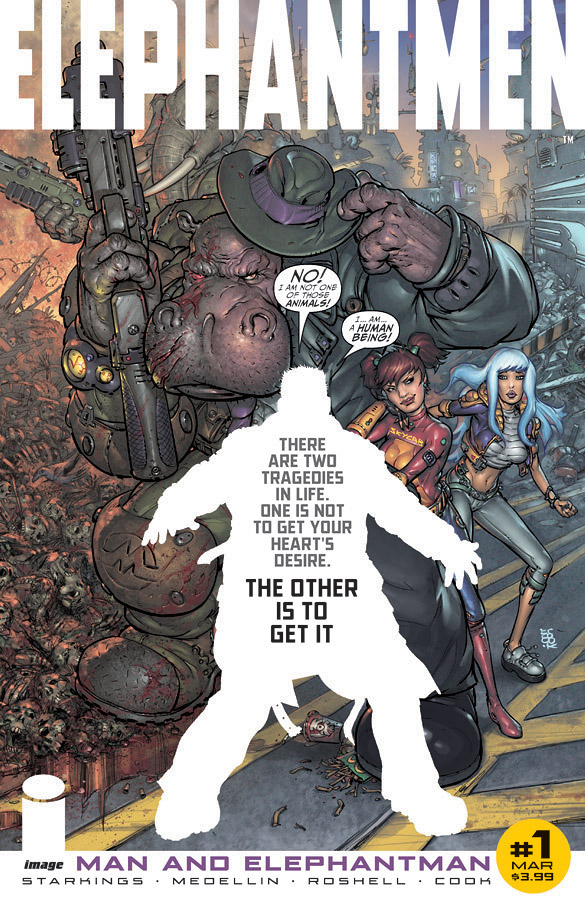 TALKING ELEPHANTMEN IN THE WALKING DEAD
ELEPHANTMEN: MAN AND ELEPHANTMAN gets an exclusive preview in THE WALKING DEAD #81
Berkeley, CA – 13 January 2011 – In March 2011, comics fans will get a special treat with ELEPHANTMEN: MAN AND ELEPHANTMAN #1 from Image Comics, an INVINCIBLE RETURNS-style
one-shot that’s perfect for both long-time fans and readers just now discovering the series.
Image Comics is pleased to present a special advance preview of this landmark issue of ELEPHANTMEN in THE WALKING DEAD #81, the second part of the provocative “No Way Out” story arc. Consisting of five never-before-seen pages, the preview will come in full color.
ELEPHANTMEN: MAN AND ELEPHANTMAN #1 is written by Richard Starkings and painted by Axel Medellin, with variant covers by Starkings, Ian Churchill (MARINEMAN, Supergirl) and Ed McGuinness (Hulk, Superman), along with an incentive cover by J. Scott Campbell (Danger Girl).
“I am a big fan and loyal reader of THE WALKING DEAD,” says Starkings. “I know from talking to fans at shows that we have an overlapping readership. This is a great opportunity for TWD readers who have not looked at ELEPHANTMEN to get a tantalizing taste of the series. MAN AND ELEPHANTMAN is an easy jumping on point and features the beautiful full color artwork of our new regular artist, Mighty Axel Medellin!”
Image Publisher Eric Stephenson declares, “ELEPHANTMEN is one of the most original concepts in comics. What Richard and Axel are doing with this issue and the arc that follows is nothing short of amazing. If this stuff doesn’t get you interested, you hate comics, you hate America, and you hate life! Okay, maybe that’s a little over the top, but my point is: This is an excellent, excellent series that everyone should be reading.”
The Elephantmen are the survivors of genetic engineering experiments conducted by a sinister organization that sought to create biological weapons of mass destruction. Freed and rehabilitated, the Elephantmen now live among the people they were designed to destroy, continually treated with suspicion and contempt except by a handful of trusted human allies. But when these allies find themselves continually at risk, how long can they remain loyal to the Elephantmen?
THE WALKING DEAD #81 (NOV100472), a 32-page black and white comic book featuring a special preview of ELEPHANTMEN: MAN AND ELEPHANTMAN #1, will be in stores February 9, 2011, for $2.99. ELEPHANTMEN: MAN AND ELEPHANTMAN #1 (JAN110548), a 40-page full-color comic book for $3.99, will be in stores March 30, 2011.
Also out in early 2011: ELEPHANTMEN: COVER STORIES #1 (February 16, $5.99, DEC100455), a 64-page full-color collection of covers and sketches by Ladrönn and Boo Cook that features a flip cover by Cook; ELEPHANTMEN: WAR TOYS, VOL. 2: ENEMY SPECIES OGN (March 2, $9.99, NOV100423), an all-new 104-page full-color graphic novel by Starkings and artist Boo Cook; ELEPHANTMEN: WAR TOYS: AGATHE (March 9, $3.50, AUG100414), an all-new one shot by Marian Churchland (BEAST) and Moritat (The Spirit); and ELEPHANTMEN, VOL. 4: QUESTIONABLE THINGS HC (March 23, $34.99, JAN110550), a 312-page full-color graphic novel.
Image Comics is a comic book and graphic novel publisher founded in 1992 by a collective of best-selling artists. Image has since gone on to become one of the largest comics publishers in the United States. Image currently has five partners: Robert Kirkman, Erik Larsen, Todd McFarlane, Marc Silvestri and Jim Valentino. It consists of five major houses: Todd McFarlane Productions, Top Cow Productions, Shadowline, Skybound and Image Central. Image publishes comics and graphic novels in nearly every genre, sub-genre, and style imaginable. It offers science fiction, romance, horror, crime fiction, historical fiction, humor and more by the finest artists and writers working in the medium today. For more information, visit www.imagecomics.com.