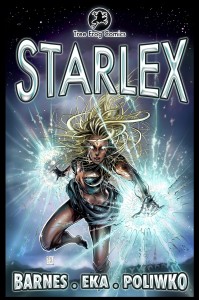 Alexis Starling was a Photography and Art student at Los Angeles University. One evening she was up near the Hollywood sign taking some pictures for her portfolio when

she noticed a shooting star. She snapped away as the star came closer, “…the star fell faster and faster, she gazed up at it frozen, she could not move. Faster and

faster the star fell, closer and closer until… silence. For that split second there was nothing. Time stood still. As the star fused with her body they became one.

She fell to the ground, her body sparkling like the night sky above…” She absorbed the power of the star and became Starlex! 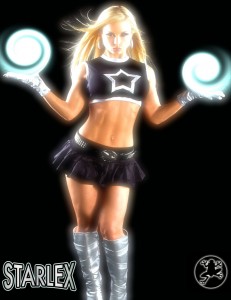 STARLEX Issue #0 TM and © Concept/characters/story Created By Dan Barnes In 2009 Under The Tree Frog Comics Banner. All rights reserved.