BEVERLY HILLS – Todd McFarlane’s original art for The Amazing Spider-Man #328 (Marvel, 1990) brought a World Record $657,250 on July 26 as part of Heritage Auctions’ Signature® Comics and Comic Art Auctionin Beverly Hills. The artwork, showing Spidey demonstrating his awesome new powers on the Hulk, is now the single most valuable piece of American comic ever sold at auction.

“This is an this earth-trembling cover illustration and an equally magnificent price,” said Todd Hignite, Vice President of Heritage Auctions. “McFarlane’s art brims with the raw energy that sky-rocketed McFarlane to the top of the industry and, now, the top of the auction world.”

The artwork was sold — along with McFarlane’s original art for Spider-Man #1 (Marvel, 1990), which brought $358,500 — as part of the first tranche of the Shamus Collection of Modern Masterworks, a unprecedented collection of late-1980s and early 1990s original comic book art put together by Martin Shamus, owner of a comics and memorabilia shop on Long Island.

The Heritage auction, which also features the Doug Schmell/Pedigree Comics.com Collection, most of which earlier in the day realized over $3.7 million, and should come in closer to $4 million once the auction has finished.

“The auction is on track to break $9 million and become the single highest grossing comic and comic art auction in history,” said Hignite. “We’re thrilled with the results and especially thrilled for Martin Shamus, who had the foresight and good taste to acquire these pieces more than two decades ago.” 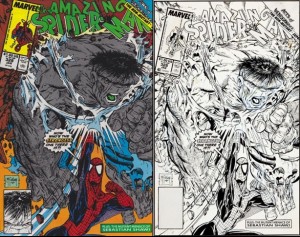 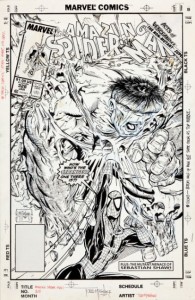