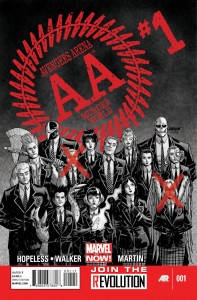 New York. NY—September 13, 2012— This December, prepare for the deadliest game of all as Avengers Arena #1 kicks off an all-new ongoing series from rising star creators writer Dennis Hopeless (X-Men: Season One) and artist Kev Walker (Thunderbolts). As part of Marvel NOW!, Avengers Arena joins a number of titles that will take the Marvel Universe in an exciting all-new direction, as the industry’s top creators join the top Super Heroes to deliver all-new ongoing series, great for new and lapsed readers alike!

Trapped on an isolated island, 16 superhuman young adults (including members of the Runaways, The Avengers Academy and Darkhawk) are given a chilling ultimatum by their demented captor: Fight or die…only one will walk out alive! Thus begins a primal battle that will test the skills, stamina and morals of each combatant. Welcome to Murder World, where the secrets are plenty, alliances are fleeting, and the key to victory might be rewriting the rules of the game. Who will survive?

“These kids were chosen carefully and with specific story beats in mind. We definitely plan on taking advantage of the broad personality spectrum we have in play,” explained Dennis Hopeless in an interview with Marvel.com. “Even the characters who die off early make their mark on the story. I didn’t throw anyone into the book as cannon fodder.”

“There is no safe base, no refuge, no cavalry to come charging over the hill. The contestants’ every moment is watched, manipulated and controlled,” elaborated Kev Walker in an interview with Marvel.com. “This is up close and personal, more intimate than any other book out there, because it’s just us and them.”

Marvel NOW! is the culmination of Marvel ReEvolution, the groundbreaking new initiative to evolve the comic book experience through innovation. With Avengers Arena, Marvel NOW! ensures fans will discover an entirely new perspective on what it means to be a teen hero…and to survive!

“Avengers Arena is one of the most exciting new launches in Marvel NOW!, really embracing the idea of giving fans a new look at the Marvel Universe and showing the deadly results,” said Axel Alonso, Editor in Chief, Marvel Entertainment. “Dennis and Kev have created a series that’s going to leave readers salivating for the next issue, with so many twists and turns that no one can predict where it’s going. They’re also introducing some all-new characters that we’re certain will become instant favorites, like the enigmatic Deathlocket and the mysterious Braddock Academy.”

“Extreme scenarios bring out the best and worst in everyone, especially when you’re a young adult still struggling to find out exactly who you truly are under your mask,” added Editor Bill Rosemann in an interview with Marvel.com. “When ordered to fight or die, which wins out, your morals or your survival instinct? How much are you willing to compromise–and how far are you willing to go–in order to live?”

Each issue of Avengers Arena features special augmented reality content available exclusive through the Marvel AR app – including cover recaps, behind the scenes features and more that add value to your reading experience at no additional cost.

1 thought on “The Future of AVENGERS ARENA Is Marvel NOW!”