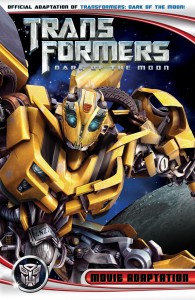 “With a third sure-to-be-blockbuster film on the way, we’re presented with a unique opportunity to really get to the heart of the conflict between OPTIMUS PRIME and MEGATRON,” said series editor Andy Schmidt. “These are the most character-driven stories we’ve told yet.”

Written by comics mainstay John Barber, the four-issue series TRANSFORMERS: DARK OF THE MOON – FOUNDATION explores the most hidden secrets of CYBERTRON, with the masterful art of Andrew Griffith. The second four-issue series, TRANSFORMERS: DARK OF THE MOON – RISING STORM, sets the stage for the biggest, boldest threat to both Earth and CYBERTRON yet, brought to life in gripping detail by artist Carlos Magno. “Rising Storm focuses on the direct threat in the new film and how these new players set the stage for the climactic finale in the film,” says Schmidt. Several issues of both series are available in comic stores throughout North America, with the graphic novels launching on May 18th wherever books are sold.

“We had a lot of lead-time on the TRANSFORMERS: DARK OF THE MOON books, which has allowed our artists to bring their A-game and try new things. These are going to be the best looking TRANSFORMERS books to date,” added Schmidt. “We’re reaching a new level with these and we’re all happy with the outcome.”

Coming on May 25th, fans can get a sneak peek of all the movie action with TRANSFORMERS: DARK OF THE MOON MOVIE ADAPTATION, written by John Barber with art by Jorge Jimenez Moreno. The AUTOBOTS, led by OPTIMUS PRIME, are back in action, taking on the DECEPTICONS, who are determined to avenge their last defeat, as favorite heroes return in a face-off against MEGATRON and STARSCREAM.

About IDW Publishing  IDW is an award-winning publisher of comic books, graphic novels and trade paperbacks, based in San Diego, California. Renowned for its diverse catalog of licensed and independent titles, IDW publishes some of the most successful and popular titles in the industry, including: Hasbro’s The Transformers and G.I. JOE, Paramount’s Star Trek; HBO’s True Blood; the BBC’s Doctor Who; Toho’s Godzilla and comics and trade collections based on novels by worldwide bestselling author, James Patterson. IDW is also home to the Library of American Comics imprint, which publishes classic comic reprints; Yoe! Books, a partnership with Yoe! Studio; and is the print publisher for EA Comics.

IDW’s original horror series, 30 Days of Night, was launched as a major motion picture in October 2007 by Sony Pictures and was the #1 film in its first week of release. More information about the company can be found at IDWPublishing.com.
About Hasbro
Hasbro, Inc. (NASDAQ: HAS) is a branded play company providing children and families around the world with a wide-range of immersive entertainment offerings based on the Company’s world class brand portfolio.  From toys and games, to television programming, motion pictures, video games and a comprehensive licensing program, Hasbro strives to delight its customers through the strategic leveraging of well-known and beloved brands such as TRANSFORMERS, LITTLEST PET SHOP, NERF, PLAYSKOOL, MY LITTLE PONY, G.I. JOE, MAGIC: THE GATHERING and MONOPOLY.  The Hub, Hasbro’s multi-platform joint venture with Discovery Communications (NASDAQ: DISCA, DISCB, DISCK) launched on October 10, 2010. The online home of The Hub is www.hubworld.com. The Hub logo and name are trademarks of Hub Television Networks, LLC. All rights reserved.
Come see how we inspire play through our brands at http://www.hasbro.com. © 2010 Hasbro, Inc.  All Rights Reserved.
About the Film
TRANSFORMERS: DARK OF THE MOON, is directed by Michael Bay, written by Ehren Kruger and produced by Don Murphy & Tom DeSanto, Lorenzo di Bonaventura and Ian Bryce. The executive producers are Steven Spielberg, Michael Bay, Brian Goldner and Mark Vahradian. © 2011 Paramount Pictures Corporation. All rights reserved.