Berkeley, CA – 25 April 2011 – The first issue of Image Comics’ grisly new zombie comic, ’68, has impressed ravenous horror fans so much that the first printing sold out at the distribution level right as copies were hitting the shelves. In an effort to provide comic shops with uninterrupted availability of this gruesome new miniseries, a second printing of ’68 will return to stores soon with an all new cover by artist Nat Jones.
’68 originally began as a one shot which can be found in HORROR BOOK, VOL. 1 TP, an anthology that also contains other horror titles such as CREATURE FROM THE DEPTHS, FRANKENSTEIN, and FULL MOON.
The first issue of the new ’68 miniseries delves straight away into the base camps, dark jungles and tunnels of Vietnam in 1968, where writer Mark Kidwell (Bump) guides doomed young soldiers among the countless rotting undead victims of war. Artist Nat Jones (FRANK FRAZETTA’S DEATH DEALER) illustrates the fine details of decomposition and Jay Fotos (LOCKE & KEY, SPAWN) provides expert coloring, including plenty of bloody red gore!
Besides receiving plenty of attention from enthusiastic zombie fans, ’68 has also captured the attention of the press:
“Image already has a flesh-eating hit with Robert Kirkman’s THE WALKING DEAD, and it may soon have another, with the ’68 creative team — writer Mark Kidwell, penciler and inker Nat Jones and colorist Jay Fotos — and their horrific emphasis on war-torn drama, carnage, gore and loads of blood spatter. ” — USA Today
“…the team behind ’68 actually come across as horror fans and it shows in their work and the details.” — Player Affinity
“Deserving of great praise, ’68 is a brilliant example of story and art fused together! …This is an incredibly smart and captivating look at war through the zombie genre. When you start reading, you’ll ask yourself, “Why didn’t anyone think of this before?” No comic book fan should miss out on ’68…” — Fangoria
“There just aren’t very many original zombie stories left out there, but ’68 is going to be one of them.” — Newsarama
“The entire ’68 team is blown away by the news of our first issue selling out!” said Kidwell. “As independent creators, we all share a huge workload in bringing the book to the readers, and it’s deeply gratifying to all of us that ’68 has found its audience and been so enthusiastically received.
“Huge thanks to everyone who picked up the book and to those who took the time to let us know how much they liked it! We invite you all to stick with us as we move deeper into the jungles. It’s gonna be a nightmare!”
’68 #1 Second Printing (MAR118186), a gory 32-page full color war/horror comic book, as well as ’68 #2 (MAR110569, MAR110570 and MAR110571) will each be on sale May 18, 2011 for $3.99. HORROR BOOK, VOL. 1 TP (APR082177), a 128-page full color anthology of horror comics, is still available for $14.99. 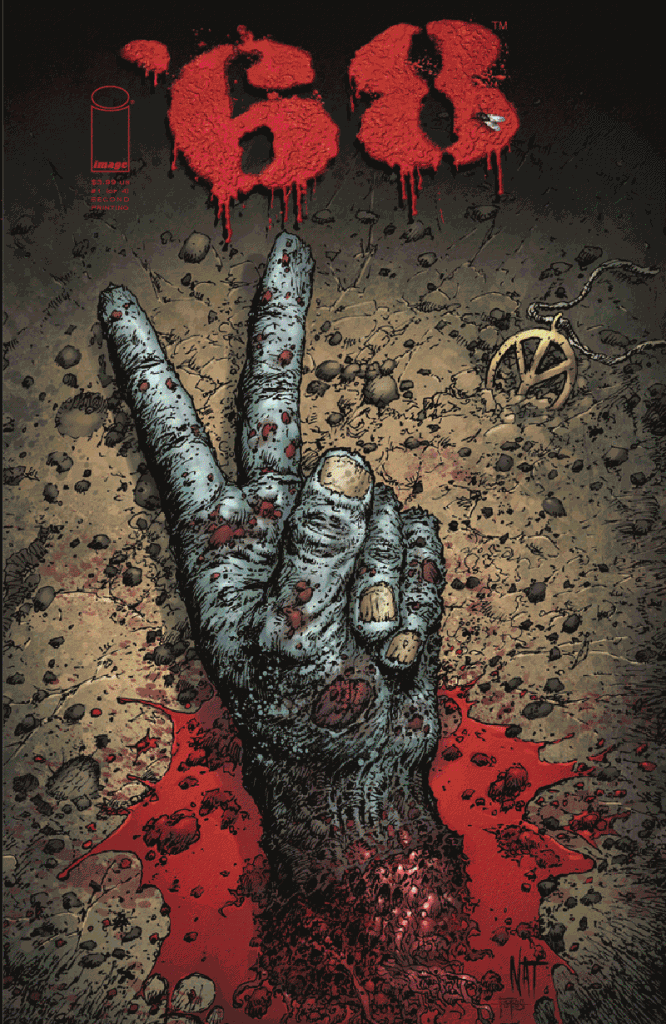