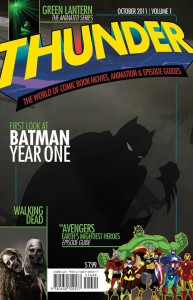 Check out what Thunder Magazine sent InvestComics! What IS Thunder you might ask? Read below and check out the awesome cover!

Stormfront Entertainment announces the debut of THUNDER!, the new magazine
devoted entirely to the world of comic book movies and TV shows with exclusive
interviews, behind the scenes episode guides and much more.

Our debut issue includes a first look at the live action Avengers film,
featuring exclusive interviews with writer/director Joss Whedon and producer
Kevin Feige. From there we go behind the scenes on the made for DVD animated
film Batman: Year One (including one-on-one interviews with voice actors Ben
McKenzie, who stars as Batman, and Eliza Dushku, who voices Catwoman); and DC’s
first foray into the world of CG animation with Green Lantern: The Animated
Series. Sticking to the world of DC a little longer, we provide a preview of the
next film in the DVD series, Justice League: Doom. This in turn leads to a look
at season one of AMC’s The Walking Dead.

Each issue of THUNDER! will take a flipbook approach by featuring a different
extensive episode guide to a television series. In the case of issue number one,
things are brought full circle by heading back into Avengers territory with the
most comprehensive guide to the animated The Avengers: Earth’s Mightiest Heroes,
in which supervising producer Josh Fine and story editor Chris Yost discuss all
26 episodes of season one while providing some tantalizing clues to year two.

“For me, THUNDER! is the culmination of a lifelong passion for comics and film,”
offers Gross. “This is a great opportunity to combine and cover both of them in
a way that no one else is doing.”

“With the loss of Wizard magazine, we are trying to pick up where they left off.
I was a huge fan of their production value and we plan to hit that with this
book” said Managing Editor Hayden Cowan.

The quarterly magazine will retail for $7.99 and be available through Barnes &
Noble and most online venues like Amazon.com as well as local comic book stores.

To find a comic book store near you go to www.comicshoplocator.com.