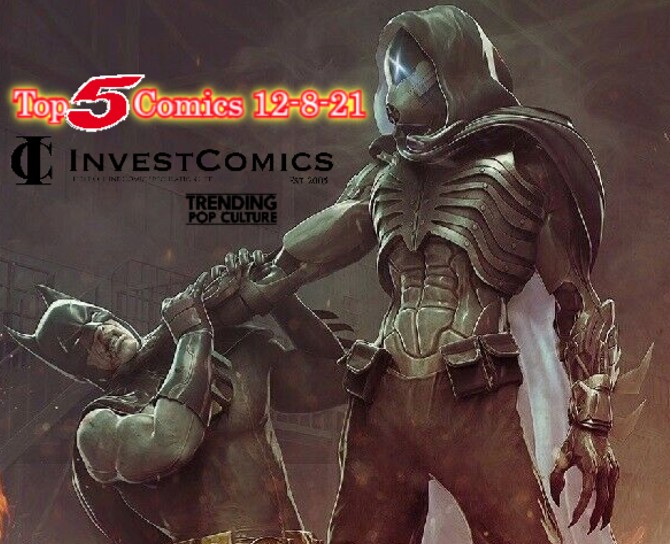 Like something we’re talking about? Like a cover? Like the debut of a new series? A first appearance?
Click on ALL Red-Highlighted LINKS/Comic Covers to BUY/BID from ALL available eBay sellers now (always buy from high-rated eBay sellers).
Batman #118 – A new story arc begins; Abyss. With so many new character introductions within the Batman universe in the last couple of years or so,

will comic fans be treated to this new arc with a newer villain or a new one altogether? We shall see. One side note with this new release. Artist Viktor Bogdanovic pays homage with a variant version of Todd McFarlane’s Spider-Man #1 cover from 1990. We put a little GIF together for you to see the 1990 cover and the 2021 cover. Neat huh? Mr. Bogdanovic does the 90 cover justice here. We love it.
Marvel Voices Community #1 – Marvel Comics will introduce some new characters here so you may want this one in your collection. There is a standout character (not named) that will be the focal point here.
Dark Knights of Steel #2 – We informed readers here about the debut issue of this new series. The series is essentially introducing a whole new Batman universe to the DCU. These new universes tend to take a life of their own in the aftermarket if something pops. A new hero or new villain everyone seems to gravitate to. If the sudden hysteria begins, it’ll probably be too late for most of you.
Buckhead #1 – New Boom Studios series. A video game that depicts the town of Buckhead, USA. Men in black give chase to Toba and his friends who made the discovery of the video game. RUN!
From week to week (since 2005), we talk about various new releases that are supposed to make their way on their arrival date, but things do not tend to always work out that way. Comics get delayed, pushed back, and sometimes pushed out altogether. It happens. No big deal. We’re going to sometimes highlight a comic or two that will make its way to your hands THIS week as opposed to the time we highlighted it, last week or previously. The thing is, if you jumped on this week’s highlight LAST week, via an eBay purchase (cannot always rely on the comic shop special pull for you), you’d be ahead of the game and not chasing a hot comic THIS week. See, it actually works out better for ya! Star Wars: Crimson Reign #1, out THIS week, will feature the first appearance of Sear. Best get on that now. Again, would have had it last week when we spoke about it, but hopefully, you’re not scrambling this week if it becomes super hot.

Here are the rest of the trending comics headed your way this Wednesday from our flagship article; Hot Comics 12/8/21. Also, check out our other posts this week—-> Best Cover Art 12/8/21 and Trending Collectibles 12/8/21.