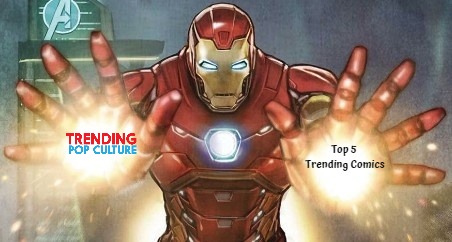 Well, here it is. A few issues earlier, IDW Publishing turned the modern speculation market on its proverbial head with the introduction of the first ever female ninja turtle; Jennika. This Wolverine clawed badass female isn’t going anywhere for a long while, but how in the world will IDW top their Jennika intro?? For starters, they’ll have this 100th anniversary issue met with so many variants it’ll make your head spin. Couple one of these “rarer” variants with an explosive intro or storytelling wonderment and bingo, you have instant gold once again. Neither here nor there, this comic will probably be the best selling out of all of the comic companies this Wednesday. Teenage Mutant Ninja Turtles will own new comic book day. One more thing. There is a Jennika variant cover that explains her entire origin on the front an back cover. Get that variant if you’re a collector. Tom Waltz and Kevin Eastman write. Art by Dave Wachter.
Captain Marvel #13 – Just like the Marvel 2020 covers, this Venom Island could introduce the Symbiote monkeys. Monkeys everywhere! Cover from Joshua Cassara.
The Dark Knight Returns The Golden Child #1 – Writer extraordinaire Frank Miller makes his return, yet again, to Batman. Artist Rafael Grampa will be on pencil duties after a six year hiatus. This comic arrives with some controversy attached. There are a few variant covers available on Wednesday, but one in particular will not be making it to the China comic shops. The cover at the center of the brouhaha has a Rafael Grampa Batman throwing a Molotov cocktail. With the tensions running so high right now in China, the Chinese government felt it was too strong of a message to be sending to the protestors. See how great it truly is living in America?
Avengers Iron Man #1 – The new Avengers video game begins right here. This story leads right into the game. Expect the possibility of a new character popping up. Writer Jim Zub and artist Paco Diaz.
Oggy And The Cockroaches #1 – This new comic series from American Mythology is based on the mega-hit Youtube animation channel. It’s just about sold out on the distributor level, so by the time you reach the end of this sentence it’ll be official. It should be absolutely no surprise that this debut comic will in fact sell out. The Youtube subscribers for the Oggy And The Cockroaches channel are up to 5.4M. That letter M is for the word million. Writers S.A. Check and Jordan Gershowitz, along with animator/artist Dean Rankine will bring some serious followers to the comic genre. One more thing that’s lighting a bit of curiosity. There are no copies of this comic available on eBay at the moment. Short print run maybe?