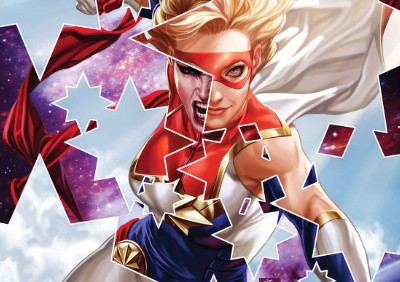 Loki #3 –  Marvel says Loki will run into a “new force” that will change the Marvel Universe landscape. Delivered by Daniel Kibblesmith (writer) and Oscar Bazaldua (artist).
Captain Marvel #10 – This series is a hot one these days. Many retailers are still limiting customers to only one copy on new comic day. Blame the new character Star and a great storyline from writer Kelly Thompson and artist Carmen Nunez Carnero.
Miles Morales Spider-Man #10 – Marvel is celebrating with it’s 250th “Spider-Semiquincentennial” issue. What does this mean? No idea. The comic does feature a boat load of things in it though. Major storyline, a possible intro of a villain, special guest, an orgin story back-up, yes this comic is packed with goodies. Writer Saladin Ahmed and artist Javier Garron.
Doctor Strange #19 – An interesting story is set up by writer Mark Waid. Doctor Strange’s life will change due to some car accident he witnesses or is involved in. Just like his own accident changed his, this will change his life once again. Artist Jesus Saiz.
Chastity #1 – This mature audience title from Dynamite Entertainment delivers this Wednesday with a ton of great variant covers. A new series from writer Leah Williams and artist Daniel Maine is selling at a sold out pace. Look for it to sell out completely soon

Here are the rest of the trending comics and items headed your way this Wednesday from Trending Comics and More #595 (LOTS MORE there!)