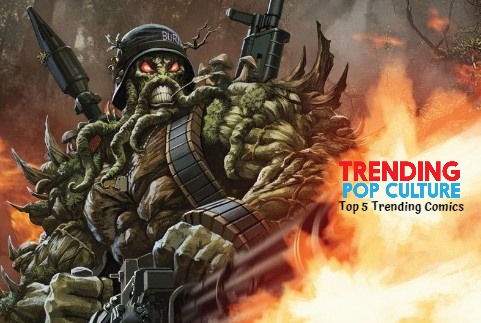 Thor #2 – It’s safe to say, writer Donny Cates is not looking for DC Comics work anytime soon. It’s very evident in this comic. He annihilates the entire DC Universe within the pages of this comic. In a Marvel comic. For about 3 pages, he details the utter destruction of “The Gods” of a particular world/universe, including a Bat God. It’s not the first time the big two have gone this route and it won’t certainly be the last. Artist Nic Klein carefully crafts the imagery so that lawsuits don’t start flying.
Teenage Mutant Ninja Turtles #102 – A possible big trender here if some new characters are introduced. Keep an eye out on this one. Creative team; Kevin Eastman, Tome Waltz and Sophie Campbell.
Ravencroft #1 – Ravencroft is officially a hit. Writer Frank Tieri is kicking ass and taking our money. Look for this comic to sell out as have the previous three Ravencroft stories Mr. Tieri has written. Art from Angel Unzueta.
Weapon Plus World War IV – The cover shows Marvel fans the character Man-Thing. But, it’s not. It’s a “new” character named “Man-Slaughter”. Yes, it’s Man-Thing with big guns. No need for camouflage here! Marvel says this is an introduction. So, we will accept this and love it. Artist George Jeanty and writer Ben Percy bring the first appearance of Man-Slaughter.
Avengers #30 – The new wielder of the Starbrand is revealed! Writer Jason Aaron and artist Ed McGuinness.

Here are the rest of the trending comics and items headed your way this Wednesday from Trending Comics, Best Cover Art, Trending Collectibles And  MORE #612 (LOTS MORE there!)