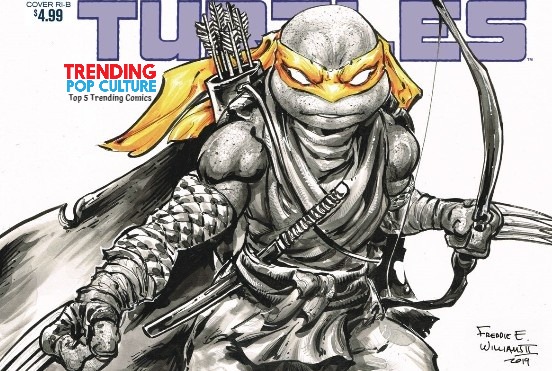 Year Of The Villain Hell Arisen #3 – Well, here it is. The biggest modern speculation comic of 2020. The first appearance of Joker’s new girlfriend; Punchline. Batman #89 was supposed to be the cameo appearance of Punchline, but it gave fans a panel that contained the first look at her mouth, nose and left hand. Speculators continue to pay top dollar for this comic even though the word is out that this is a big bag of nothing. Professional speculation sites and expert speculators will insist it’s something, just to make a buck. Don’t be silly, buy this comic at cover price (good luck with that), it’s the prize, not Batman #89.
Teenage Mutant Ninja Turtles Jennika #1 – Think of the Frank Miller Wolverine limited series back in the ’80s. It was his first solo number one issue and it’s a must-have in a collection. The first female Ninja Turtle gets her solo title. She’s going to be around for a very long time. The Jennika character is gold and a smart creation on the part of IDW. Look for this comic to be a long term hold from the speculative side and to trend mightily out of the gate. An introduction of a new villain adds to the lure of this comic’s value. Writer/artist Brahm Revel will deliver this instant classic.
Hidden Society #1 – Here is a sleeper from Dark Horse Comics that will sell out and missed by some because Punchline and Jennika have everyone’s attention. Writer Rafael Scavone and artist Rafael Albuquerque.
Tarot #3 – The first appearance of The Unbelievable’s. Alan Davis writes and Paul Renaud pencils.
Falcon & Winter Soldier #1 – Disney+ will deliver the television series of the same name here. Writer Derek Landy and artist Federico Vincentini deliver the comic. A possible first appearance in this book.

Here are the rest of the trending comics and items headed your way this Wednesday from Trending Comics, Best Cover Art, Trending Collectibles And  MORE #616 (LOTS MORE there!)