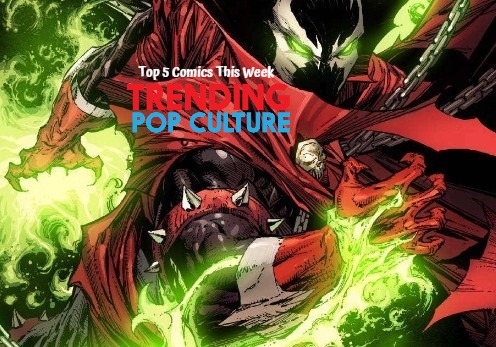 Spider-Woman #1 – The Spider-Woman character gets another crack at her own series with a new costume. Check out Jessica Drew’s new adventures brought to you by writer Karla Pacheco and artist Pere Perez.
Nightwing #70 – Here’s a comic that is out of control within the aftermarket already. Before new release day on Wednesday, this comic is being sold on eBay for $35-$70. Sold out. The second print already announced. Here’s the crazy part, the sales are all derived on a hunch by some that Punchline appears in it! It’s also the prelude to Joker War, but a hunch? Man, InvestComics seems so long ago, got out of this ridiculousness just in time.
Year Of The Villain Hell Arisen #4 – And speaking of Punchline. Will she appear in this comic? She debuted in the last issue, so…maybe? Maybe not. Sold out though.
Spawn #306 – A new character is introduced and artist Philip Tan is back. Ninja Spawn? Yep. Todd McFarlane writes.
Guardians Of The Galaxy #3 – Two for the price of one. This soon to be sold out comic debuts the new team; West Spiral Arm Guardians and also introduces Prince of Power. The new team will have their own animal character that isn’t a raccoon. Its name is Blackjack O’Hare. Appearing in on 13 comics since first being introduced in 1982 in Incredible Hulk #271. That first appearance is super pricey too. Not sure why (sarcasm). Writer Al Ewing and artist Juan Cabal.

Here are the rest of the trending comics and items headed your way this Wednesday from Trending Comics, Best Cover Art, Trending Collectibles And  MORE #619 (LOTS MORE there!)