Here are this week’s top trending comic books and new items headed your way this Wednesday 6-27-18
This site is BEST VIEWED on Google Chrome.
Click on the RED links, Images or the comic cover to buy/bid from All available sellers on Ebay
Please note: New comic book releases and all items are subject to change 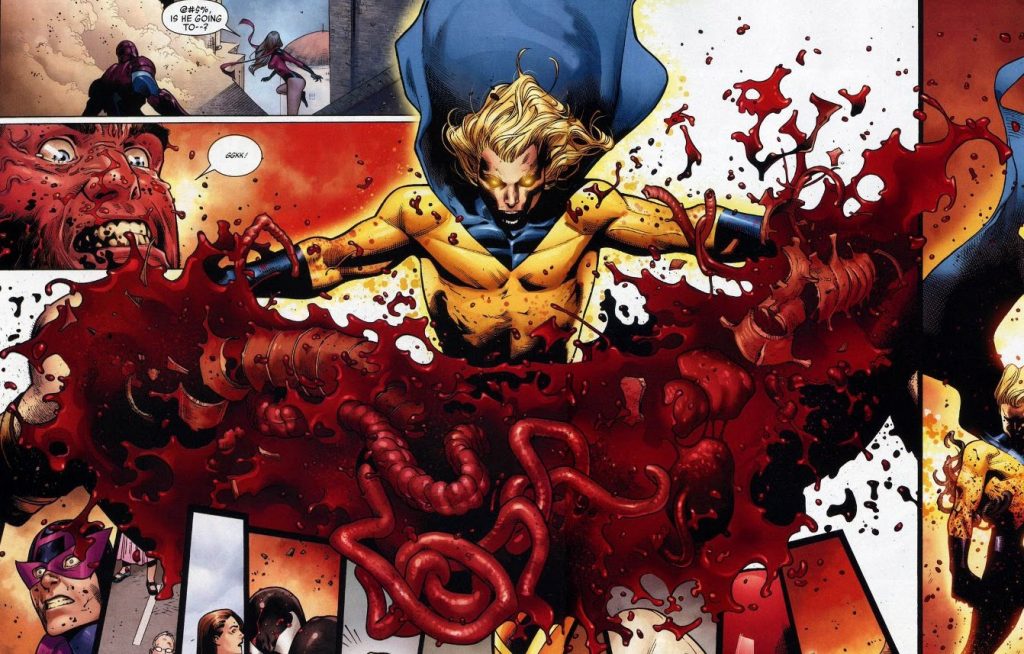 The villain known as Harvester will be making his presence known in the new Deadpool series; Deadpool: Assassin #2. This version of Harvester first appeared in Scarlet Spider #3 (2012).
Marvel’s version of Superman makes his way back into the fold of the Marvel U with a new number one issue. Sentry #1 from writer Jeff Lemire and artist Aaron Kim Jacinto. This character should have been more then a B or a C lister by now but simply isn’t. Maybe this will be the time he breaks out a bit. He was quite popular back in when he debuted in Sentry #1 back in 2000. The defining moment within this character’s young life has to be in Siege #2. Sentry vs. Ares and it ended really bad for Ares. Sentry literally ripped Ares in half. Literally. See the image above of the actual ‘splash’ page spread that showed this insanity. Yes, that’s pretty bad as* and he’s back in his own comic once again. We’re team Sentry 100%.
Moon Girl And Devil Dinosaur #32 introduces Princess Fisk. Sold out.
Ms. Marvel hits issue number 50 with Ms.Marvel #31. Yes, it’s 50 total issues from the previous 5 million restarts (sarcasm of course). However, this issue promises a surprise in it that’ll ‘rock Kamala’s world’. This is all according to Marvel, so don’t hold us to it.
The new Wakanda Forever: The Amazing Spider-Man #1 sees Dora Milaje teaming up with various Marvel U players. You can all guess who she’s teaming with first. Creators; Nnedi Okorafor and Alberto Alburquerque.
Jimmy Hudson will get a new codename in X-Men Blue #30. Marvel asks the question though, is he friend or foe? Pick this up and find out.
A few years ago, some rumors made its rounds about Multiple Man being played by James Franco in a film and the speculative market blew up. Since then, cooler heads have prevailed, and the aftermarket calmed its happy as* down a bit. Marvel now tries to pick up the pace again with the release of Multiple Man #1. Matthew Rosenberg and Andy MacDonald bring fans this new tale.
New all-ages comic; Marvel Superhero Adventures: Webs, Arrows, and Ants. Oh My! #1. That’s a mouthful. Jim McCann and Dario Brizuela.

DC Comics has a hit on their hands this Wednesday. Better get this one quick if you don’t want to miss the boat. Trending already on media outlets, Teen Titans Special #1 sets up the Teen Titans for a new start and a new series of their own. Writer Adam Glass and artist Robson Rocha.
Teaming Harley Quinn and the Joker in any comic is an instant way to make heads turn. Especially when the two are at odds with each other (which is most of the time, no?). Check out Batman: Prelude To The Wedding – Harley vs. Joker #1. Creators Tim Seeley and Sami Basri. Ding ding!
Speaking of Batman, Bane: Conquest #12 brings the series to a close with an ending ‘you’ll never see coming’.

Trending Pop Culture Indie Hot Picks; Indie comics do not always show up on Ebay right way. Please check back on a regular basis, some of the smaller print indie books usually list after new comic book release day or a few days after.
Rob Liefeld mocks himself on the cover of the Bloodstrike #23 variant. The first appearance of The Pouch. Yes, this is real. Sold out too. This is real too.
Charlie’s Angels #1 from writer John Layman and artist Joe Eisma. Those two are reason enough to check this comic out.
Vampirella: Roses For The Dead #1 Billy Tucci cover is sold out. Cry For Dawn artist Joseph Michael Linsner on this one, with writer Kristina Deak-Linsner.
New release from Chapterhouse Comics; Freelance #1 from Andrew Wheeler and Juan Samu.