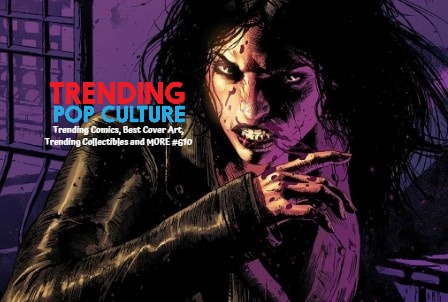 InvestComics/Trending Pop Culture; SINCE 2005.
Here are this week’s top Trending Comics, Cover Art, Trending Collectibles and MORE headed your way this Wednesday 1-15-20
Click on the RED links, Images or the comic cover to buy/bid from All available sellers on Ebay
Please note: New comic book releases and all items are subject to change

Avengers #29 – The first full appearance of War Widow. Get on board as Black Widow dons the War Machine armor and creates a new (mashup) character. It all depends on how great this new character truly looks on paper in this issue, aesthetically, in order to gauge how hot this comic could trend. Either way, still a great storyline trending; Starbrand Reborn part III. Jason Aaron writes and Ed McGuinness pencils.
Ruins Of Ravencroft Sabretooth #1 – We’ve been touting writer Frank Tieri for years. He’s not only a super nice person (one should make it a point to  meet him at a convention if he’s attending) but, he’s a super talented writer too. Last week’s Ruins Of Ravencroft #1 sold out (Covered HERE last week) and this week will be more of the same. More “hidden stories” from Marvel’s greatest villains. Make no mistake, writer Frank Tieri has arrived. Correction, he never left. Artists Angel Unzueta and Guillermo Sanna.
Aquaman #56 – Aquababy?? Yep. DC’s prelude to “Aquababy”. You see, Aquaman and his main squeeze, Mera, kissed. One thing lead to another and here we are! Writer Kyle Higgins and artists Matthew Ryan and Aaron Lopresti.
Venom The End #1 – Marvel releases another “last story of”. This Venom story has the character spanning over “a trillion years”. Wow, this comic will be lengthy no? We kid, we kid. Writer Adam Warren and artist Chamba.

Jessica Jones Blind Spot #1 – New Jessica Jones series. Always a hot underground commodity character in the collectors world. Much like Moon Knight was for years until more recently. He’ll be a household name before too long. Back to JJ, even with the Jessica Jones Netflix series, the character still seems to have managed to lay low a bit. Here’s Marvel bringing her to the forefront once again. Writer Kelly Thompson and artist Mattia De lulis.
Iron Man 2020 #1 – A NEW Iron Man is born. Marvel breaks out the bells and whistles for this one. Complete with a bunch of variant covers, even one that features a “5th color florescent ink treatment.” Okay. The variant featured here (below) is the Marvels X cover. Readers of Trending Pop Culture know that Marvel is introducing “new looks” for many of their characters on the Marvels X variants. Thus it may create a trend if one of these new look characters break out on their own. Thus creating a “first appearance.” This, mostly how the collectors market works these days. Reporting from InvestComics. Ah, the good old days. The new Iron Man 2020 series is brought to us by writers Dan Slott and Christos N. Gage and artist Pete Woods.
Rom Dire Wraiths #1 – In 1979, the comic book world was introduced to Rom in his self titled premiere issue. Rom #1 also featured the introduction to the Dire Wraiths, Rom’s main adversary. Now some 40 years later, the Dire Wraiths get their own comic book. Thanks in large part to the biggest Rom fan within the comic industry, Chris Ryall (writer/IDW’s fearless leader). Artist Luca Pizzari joins in on the fun here.
Spider-Man: The Black Cat Strikes #1 – More Gameverse comics headed our way. It looks like Spider-Man will fight a girl. That girl of course being the bad ass known as The Black Cat. Marvel promises a wicked ending here. We’re on board, you should be too. Writer Dennis Hopeless Hallum and artist Luca Maresca.