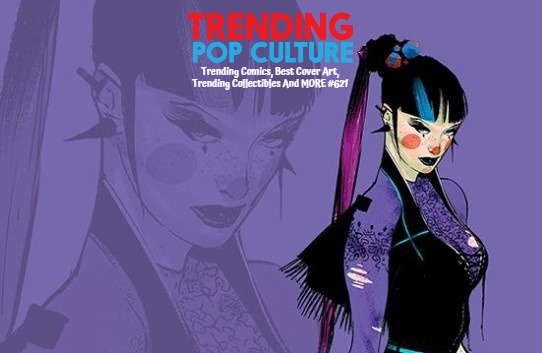 DUE TO DIAMOND DISTRIBUTION HALTING THEIR SHIPMENTS, THESE COMICS/ITEMS WILL NOT BE AT YOUR LOCAL SHOP ON APRIL 1ST 2020. TRENDING POP CULTURE WILL CONTINUE TO PROVIDE THE WEEKLY ARTICLES BECAUSE WE BELIEVE IN DELIVERING OUR FANS THE ENTERTAINMENT VALUE AND CONSISTENCY THEY COME TO EXPECT FROM US SINCE 2005. BE SURE TO BOUNCE BACK TO THESE ARTICLES WHEN NEW RELEASES PICK BACK UP OR READ ANOTHER OPTION BELOW. UNTIL THEN, BE VIGILANT AND BE SAFE.

InvestComics/Trending Pop Culture; SINCE 2005.
Here are this week’s top Trending Comics, Cover Art, Trending Collectibles and MORE headed your way this Wednesday 4-1-20
Click on the RED links, Images or the comic cover to buy/bid from All available sellers on Ebay
Please note: New comic book releases and all items are subject to change

Batman #92 – The Punchline speculation craze will have to be put on indefinite hold right now, but this one was, will be, a biggie. The first Punchline cover appearance. Two covers to choose from.
Strange Academy #2 – As a special treat, we’re going to go old school here. InvestComics old school. Speculators listen up. There is a big sleeper book among you and its name is Strange Academy #1. This comic, this series, will be very successful and spawn some crazy new heroes, villains, and will, not maybe, not might, will end up being a huge media success down the road. Movie, television, or animation. It will also spawn a lot of the same premise idea. Expect to see a Reed Richards school, a Banner school and a host of other similar trait ideas. Pay attention here. This Skottie Young idea (we asked him on Instagram and he said it was his idea.) is probably the best team idea since New Mutants. It’s actually better. The Doctor Strange Academy will be the next generation Xavier school. Do not sleep on this. So, while you have time off and hoarding some cash, buy up some Strange Academy #1 (click the red link of cover below). It will pay dividends within your portfolio down the road. After a few of those purchases, get your hands on Strange Academy #2. And continue the pattern for a long while along with the 17 restarts (number one issues). Did we forget to mention Humberto Ramos on pencils for this series? Yes, this is the comic series to be on top of. Now, back to Trending Pop Culture……
Taskmaster #1 – Well, maybe not so fast with the “back to Trending” stuff. Back 5+ years ago, InvestComics gave a heads up to speculators regarding Avengers #196 (1980). A book absolutely no one cared about in the dollar bins went unchecked until we brought it up. Do we have to tell you what that comic is doing now? The new Taskmaster mini-series will kick some ass. Writer Jed Mackay and artist Alessandro Vitti.

Gotham High – Here’s an idea used before. Now being brought to the forefront in a new way. The Batman team ala’ Archie’s (Comics) gang. It’s Riverdale/Gotham High. If done right, wowser, DC has some foundation to build from. A graphic novel release, not a comic. Writer Melissa de la Cruz and artist Thomas Pitilli.
Black Widow #1 – This series was supposed to coincide with the movie release, but this may or may not happen now. Maybe Marvel will hold this comic until the movie release. Superstar creative team on this comic too; Kelly Thompson (writer) and Elena Casagrande (artist).
Star Wars Doctor Aphra #1 – A new team, new story, new Star Wars number one issue and Aphra. What more could a collector ask for? Writer Alyssa Wong and artist Marika Cresta.
Star Wars Adventures The Clone Wars #1 – Star Wars fans get a double. A new Star Wars release. This one from Michael Moreci, Arianna Florean and IDW Publishing.
Empyre Fantastic Four #0 – The Marvel event tale “Empyre” was on its way to ramp up.

I have a BIG announcement…