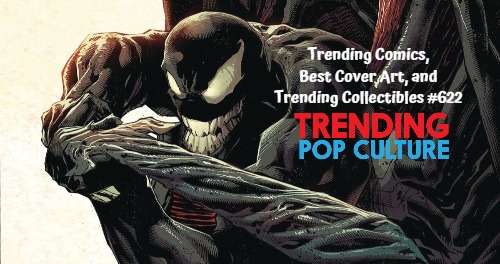 DUE TO DIAMOND DISTRIBUTION HALTING THEIR SHIPMENTS, THESE COMICS/ITEMS WILL NOT BE AT YOUR LOCAL SHOP ON APRIL 8TH 2020. TRENDING POP CULTURE WILL CONTINUE TO PROVIDE THE WEEKLY ARTICLES BECAUSE WE BELIEVE IN DELIVERING OUR FANS THE ENTERTAINMENT VALUE AND CONSISTENCY THEY COME TO EXPECT FROM US SINCE 2005. BE SURE TO BOUNCE BACK TO THESE ARTICLES WHEN NEW RELEASES PICK BACK UP OR READ ANOTHER OPTION BELOW. UNTIL THEN, BE VIGILANT AND BE SAFE.


(BUY/BID ON FUTURE SALES NOW BY CLICKING ON ANY RED LINK, COMIC OR ITEM TO ENSURE THAT WHEN COMIC SHOPS DO OPEN AGAIN, YOU WILL HAVE YOUR PURCHASE IN THE MAIL FROM YOUR EBAY PURCHASE AND WILL NOT MISS ON THE OPPORTUNITY/MAD RUSH TO GET YOUR ITEM WHEN THINGS DO COME BACK. NOT SAYING TO ONLY BUY FROM EBAY AND NOT SUPPORT YOUR STORE, BUT USE IT AS A BACKUP PLAN AND STILL BUY FROM YOUR LOCAL COMIC SHOP.
WHEN YOU BUY A COMIC OR ITEM ON EBAY, BE SURE TO HAVE A MONEY-BACK GUARANTEE (IF BOOKS/ITEMS DON’T EVER RELEASE AGAIN. DOUBTFUL THIS HAPPENS), BE PATIENT, AND BUY FROM A RELIABLE SELLER. CLICKING OUR LINKS WILL BRING YOU TO ALL AVAILABLE SELLERS ON EBAY. WE ARE NOT RESPONSIBLE FOR ANY TRANSACTION BETWEEN YOU AND A SELLER. NOW OR EVER. YOU ASSUME FULL RESPONSIBILITY AND RELINQUISH TRENDING POP CULTURE FROM YOUR PURCHASE THROUGH THIS WEBSITE.)

InvestComics/Trending Pop Culture; SINCE 2005.
Here are this week’s top Trending Comics, Cover Art, Trending Collectibles and MORE headed your way this Wednesday 4-8-20
Click on the RED links, Images or the comic cover to buy/bid from All available sellers on Ebay
Please note: New comic book releases and all items are subject to change

Avengers #33 – It’s the very start of Moon Knight vs. the Avengers. What is there not to love about this? Written by Jason Aaron, with art by Javier Garron.
The Amazing Spider-Man #43 – This comic is to change Peter Parker as you know him. If big enough and word gets out it’s a biggie, this comic will explode at the seams. Nick Spencer and Ryan Ottley.
Power Pack #1 – Many, many years ago on InvestComics, we spoke about how Disney now owned the property of Power Pack. A story created and written back in 1984, right in their wheelhouse for Disney to create something bigger than the 62 issues it lasted and a few relaunches it spawned. Some “experts” back then actually laughed instead of taking their horse blinders off. As many InvestComics ideas and text came to light, Marvel (Disney) went on to announce they were in talks to get a Power Pack film made. The laughs turned into, holy s**t, really?? It hasn’t come to fruition (yet), so the “experts” laughed once again. This week Trending Pop Culture says it’ll happen, so now the experts have something to laugh at again. Fanboys. Power Pack will be a part the Disney family, whether it’ll be on a movie screen, television screen or an animation show, it’s going to happen. Just like we told you last week that Strange Academy will be a huge property, Power Pack will be too. So, with that, click and buy (if you’d like) your Power Pack #1 (first appearance) from 1984 now on the cheaper side in some spots. Buy those Strange Academy books too (if you’d like)! The new Power Pack series will be brought to you by Ryan North (writer) and Nico Leon (artist).

Venom #25 – A special 25th oversized issue. It’s the Venom Island finale. Read what writer Donny Cates and artist Mark Bagley have up their sleeve for this one.
Spider-Ham #5 – Back in 1983, John Romita Sr. drew a cover that became a part of the iconic cover must-haves for collectors; Amazing Spider-Man #238. It’s a little bit of a harder get these days (pricing wise) because it’s the first appearance of Hobgoblin, but the Spider-Ham #5 Will Robson cover pays homage to this book.
Teenage Mutant Ninja Turtles Jennika #3 – Jennika “Year One” continues. Been telling collectors to be on top of this one. Many animation, live-action appearances later, Jennika will have her first mini-series sitting there. A series brought to you by Brahm Revel.
Anti Hero – DC introduces two new lead characters in this graphic novel. Creators Kate Karyus Quinn, Demitra Lunetta and Maca Gill.

Champions #1 – A new Champions series from writer Eve Ewing and artist Simone Di Meo.
The Punisher Vs. Barracuda #1 – Who doesn’t like a “versus” book? The villain Barracuda made his first appearance in 2006’s The Punisher #31, its seventh volume series. This debut took place within the confines of the Marvel Max universe. A universe that doesn’t really have anything to do with Marvel’s “regular” universe. Well, that all changes here. Barracuda makes his Marvel Universe debut in The Punisher Vs. Barracuda #1. Writer Ed Brisson and artist Declan Shalvey.
Mercy #2 – The Image Comics debut issue was a big success, forcing a second print. Be there for issue two as writer/artist Mirka Andolfo sells this one out too.
Dead Dog’s Bite #1 – From Dark Horse Comics, new mini-series. Creator Tyler Boss, on full duty here. Writer, artist and cover art.