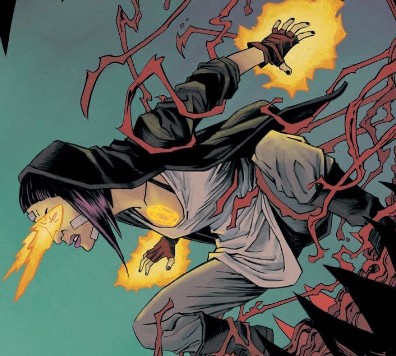 SINCE 2005. Here are this week’s top trending comic books and new items headed your way this Wednesday 7-24-19
Click on the RED links, Images or the comic cover to buy/bid from All available sellers on Ebay
Please note: New comic book releases and all items are subject to change

The Magnificent Ms. Marvel #5 – Kamala gets a brand new look this Wednesday. New costume time! Writer Saladin Ahmed and artist Minkyu Jung.
Jane Foster: Valkyrie #1 – She was once Thor, now Jane Foster is Valkyrie. A mid-life crisis perhaps? Nah, just Jane kicking some more as*. Writers Jason Aaron and Al Ewing, along with Cafu on pencils.
House Of X #1 – Every few years or so (maybe more often then every few years), the big 2 decide to really shake the tree. What falls out is usually a relaunch of some sort. The X-Men once again are up. The new era of X-Men comics and more starts right here. Jonathan Hickman writes and Pepe Larraz is the artist.
Batman: Curse Of The White Knight #1 – This Batman story continues from the successful Batman: White Knight storyline from Sean Murphy. The series is calling for the introduction of new villains within these pages. We await eagerly to see what Mr. Murphy has cooked up for us.
Action Comics #1013 – Writer Brian Michael Bendis, is turning Superman’s world upside down. Who is Rose and Thorn? What major revelation will happen? Read and you shall find out. Mr. Bendis has Superman in the constant spin cycle around the trending social media outlets. Artist Szymon Kudranski, helping with his eye candy.

Web Of Venom: Funeral Pyre #1 – With so many different symbiote type comics being churned out from Marvel these days, it’s a matter of time before another introduction sparks another ridiculous speculative move in an unwarranted market. Can someone sell that first Red Goblin for $30 anymore, that is not a “rare variant”? There are some great stories to tell and many characters to develop over time. Maybe. Pump the breaks boys and girls, you’re destroying the market you’ve creating over greed.
Tony Stark: Iron Man #14 – Writers Dan Slott and Jim Zub introduce the new Spymaster. Visuals from Valerio Schiti.
Sword Masters #1 – Are loyal Marvel Universe collectors ready for an Anime style comic? Well, we all will find out the answer to this on Wednesday and beyond. Fan favorite writer, Greg Pak digs his heels in and gives the Sword Master his own starting point. A new ongoing series will build his world. Writer Shuizhu with artists Kris Anka and Gunji join Greg Pak on this new journey.
Secret Warps: Arachknight Annual #1 – There’s been 12 issues of Archknight? Oh wait, that’s not how any of this works anymore. One of the more visually appealing mash-ups in all of the secret warps. Hopefully we’ll see more of Spider-Moon in the future after this. Creators; Jim Zub, Al Ewing, Carlo Barberi and Carlos Villa.
Guardians Of The Galaxy #7 – The death of Rocket Raccoon? Sounds all serious and emotional, but if this new storyline, “Faithless”, kills off Rocket, he’ll debut in his own series a year from now.

History Of The Marvel Universe #1 – Writer Mark Waid will tell the story of the Marvel Universe from the very beginning and beyond. Marvel says to expect big surprises along the way. Major revelations along the way. What revelations will be revealed? Is Sabretooth Wolverine’s sibling? Is Professor X related to Lex Luthor? (breathe fanboy, we know). Artist Javier Rodriguez carries the visuals alongside Mark’s words. Expect the usual expert speculator/website(s) nonsense of driving up a price if a big reveal occurs. Of course, all depends on how many copies they have in their possession first. Get woke collectors, get woke.
Dead End Kids #1 – New, from Source Point Press Comics. Creators; Frank Gogol and Nenad Cvitcanin.
Fearless #1 – Captain Marvel, Storm and Invisible Woman team up to make “Fearless”. Seems a bit of a motley crew, no? How will these characters gel together? Easy, you get writers Seanan McGuire and Leah Williams to get these gals and readers going in the right direction. Artist Claire Roe will draw the trio book.
Age Of Conan Bêlit #5 – Marvel Comics may have created their very own Batman ding-dong craze. That Jenny Frison cover. It’s so obvious.