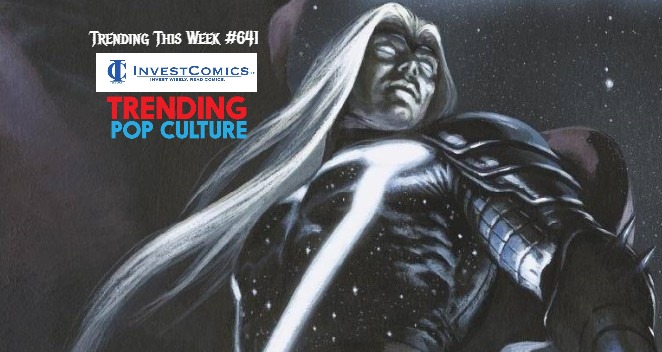 InvestComics/Trending Pop Culture; SINCE 2005.
Here are this week’s top Trending Comics and Best Cover Art headed your way this Wednesday 8-19-20
Click on the RED links, Images or the comic cover to buy/bid from All available sellers on Ebay
Please note: New comic book releases and all items are subject to change

Thor #6 – There are no guarantee’s in the speculation game. Zero. Although, this theory is sometimes put to the test almost every single week within the speculative world of new release comics. Every week there seems to be a ‘book’ or ‘books’ to peak the interest of collectors so much that it hits the aftermarket at absorbent prices. A $4.99 or $5.99 comic for $30 or $40. Happens quite often these days, whether those prices have any sustainability is another story. This week another comic is showing the potential of possibly blowing up. Rumors, eBay interest, story, and writer Donny Cates are the driving force here. Many speculators are very high on this comic, calling it a HUGE comic. Pay attention to this one. You could make a decent flip here.
Lords Of Empyre Swordsman #1 – The last thing any comic reader would ever expect is a Swordman solo comic, also starring his son Quoi. Well, here it is. Swordman first appeared in Avengers #19 (1965). A 9.6 graded sold a few weeks ago for $1400. A 9.8 graded Quoi first appearance in Avengers Celestial Quest #3 (2002) sold for $175 last week. Father and son are not big-timers at all, to say the least. Maybe this new release from writer Alex Paknadel and artist Thomas Nachlik will give readers and collectors a new lease on life for Swordman and Quoi.
Dark Nights Death Metal Guidebook #1 – These guidebooks are always ones to look out for because they can always contain a sneak peek at a character making their first appearance.

Avengers #35 – Moon Knight is all about kicking the Avengers’ asses and we have a front-row seat. The cover shows Moon Knight wielding Thor’s hammer. Reminds a bit of what may occur in Thor #6 this week.
Spider-Man #1 Facsimile Edition – Kind of strange when a facsimile edition comic is released and the original comic being ‘honored’ could be bought cheaper than the new comic out that day. A near mint copy, same cover as the new release, sold two days ago for $5.95. And let’s not even talk about the Clayton Crain variants.
Maestro #1 – The origin of Maestro from writer Peter David and artist German Peralta. With a typical badass Dale Keown cover.
Empyre X-Men #4 – Look for a possible first appearance in here.
Batman #97 – The Joker War continues. Catwoman assembles her own army.